#AuthorInterview with Leslie Kain, author of Secrets In The Mirror 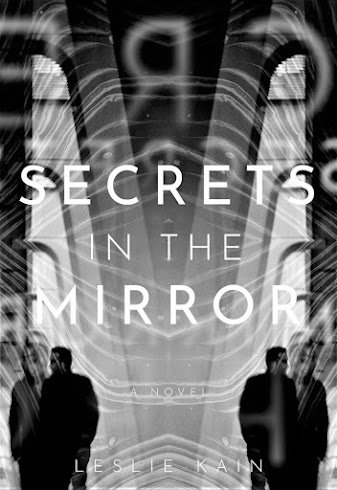 FQ: You note on your website that you write “dark psychological stories of flawed people” and there’s no doubt that Secrets in the Mirror fits that description perfectly. You also mention developing “personal relationships” with your characters so I have to ask - do you ever find yourself getting “lost” in the world of the characters you’ve created?

KAIN: I wouldn’t say that I get lost in the world of the characters, but I do find myself loving them, worrying about them. That comes first from conducting deep lengthy “interviews” of the characters before I begin writing the story, so that I know them intimately. Then as the story progresses, our relationship grows deeper. In the case of this novel, I especially worry about Gavin, the main character. He’s on my mind a great deal, mostly in quiet moments and half-asleep states. I like to say that he “comes to me” in my dreams, telling me how hopeless & trapped he feels, what he thinks about how I’ve represented him and the plot, what isn’t right, what’s missing, what should happen next. A friend of mine, a psychologist himself, reminded me that these characters are the product of my own mind, so Gavin isn’t telling me, it’s my own subconscious that’s in charge. I know this in my head, but my heart tells me my characters own their story.

FQ: Your characters are certainly unique, especially Devon and Gavin. Where do you draw your inspiration from while bringing these people to life?

KAIN: “Inspiration” comes into play at several points before―and within―a story, usually initiated by a “what if.” First at the problem or challenge level: e.g., “what if” a specific challenge is encountered by someone? A challenge that actually occurs in the real world. In this case, what if narcissism exists in a family―how does that affect the family members? But then the “what if” cascades. What if there are such tight bonds that escape is impossible, despite the narcissistic abuse―Ah-ha! Twins! More challenges for the characters to overcome the initial problem cascade as the plot unfolds; my psychology background inspires some of that and how it affects the characters. But inspiration also must occur at the level of “theme” that resonates with a universal truth. In this case, it came to me as the imperative to recognize and break multi-generational patterns of dysfunction and abuse. This is the most significant cascade. There’s a tragic scene in the book when Gavin has an epiphany, finally recognizing this as both the cause of his & his family’s dysfunction, as well as his mission to fix. I cry every time I read that scene. I always have to apologize to the book club or people at the reading.

FQ: I loved the concept of mirror twins and how they can be so different but yet, so alike. Have you encountered mirror twins in your professional/non-profit work?

KAIN: I haven’t encountered mirror twins personally, only in research studies. The ‘mirror’ twist was one of those “cascades” in the plot, which served as a metaphor for the twins’ psychological and behavioral differences. Those internal differences were initiated and promoted by their macho mob-connected father, who anointed Devon as The Best, The Winner, and Gavin as the wimp, a loser whose primary purpose was to take care of his “winner” twin. That treatment by Dad cultivated narcissism in Devon, which was accelerated to sociopathy by epigenetic alteration from his drug use and physical injuries. As well as lack of self-esteem and identity in Gavin.

FQ: You have always enjoyed writing – how smooth was the transition from non-fiction to fiction?

KAIN: I’ve always been a research geek, so that helps; all fiction writers do a ton of research to make the story plausible. But I’m the grammar, spelling & structure ‘nazi’ so I wasn’t sure I could loosen up enough to write fiction. After I left my soul-numbing tech business career in Government Intelligence and returned to my original passion for mental health within nonprofits, I began taking classes in memoir writing and fiction, both taught by the same published author. I did pretty well, surprising myself! I especially wondered whether I could do dialogue well, but it turned out to be one of my better skills, so I’m told. But I continue to improve and advance my skills through workshops (I love Donald Maass’ workshops & books!). I continue to work hard to “show not tell” and to dig deeper into characters’ emotions & the etiological bases thereof.

FQ: And speaking of fiction, you mention writing in various genres as a child - fantasy, poetry, and even plays. Do you have any interest in trying your hand at one of those genres now?

KAIN: Funny you should ask. Many people―editors, critique partners, beta readers, reviewers, ARC readers―have said that the book would make a great Netflix series. It does, you know, cover a span of eleven years, during which the twins age from 16-year-old teens to 27-year-old men. Right now I’m in the process of working with a production company for the audible version, and I’m annotating the entire manuscript for the narrator, to indicate the background, age, personality etc. of the character speaking at the moment, what’s happening around them, and so forth. So I may be finding my way into screenwriting to some extent. I don’t think my poetry should ever see the light of day (although my first novel, which is sitting on the shelf awaiting revision, has a few bits of my poetry).

FQ: In line with my previous question, you’ve had success with short stories and have had several published. This is a hard genre to master! Do you find these short stories come easily to you or is it harder to get a good story in such a short “space”?

KAIN: I’m a “lean” writer, so I don’t struggle with squeezing the story into a shorter space. (I just wrote a 6k-word story scheduled to appear in an anthology.) The challenges for me are the same as with a longer story―taking the time to dig deeper to ensure the reader experiences the same emotions my characters are feeling, taking the time to let my “voice” come through and immerse the reader in the dynamics of the story, show vs tell.

FQ: Do you identify especially with any character in Secrets in the Mirror?

KAIN: I find myself very connected to the main character Gavin because of his struggle―the almost impossible challenge of developing his own sense of self, his personhood, identity and agency, after being told by his father & twin all during his formative years that he was a loser. This is similar to what I experienced in my first sixteen years.

FQ: Have you enjoyed and explored the mystery fiction genre as a background to the creation of this book – or did the complex plot with its eerie unknowns and undertones just roll out effortlessly?

KAIN: I never saw this story as a mystery. I saw it as a search for Self, and having to choose between the imperative to save someone versus the need to save oneself. The ‘mystery’ component comes in during the last third of the book, when Gavin is being stalked & threatened, and trying to identify who is doing it. That stalking (which, short of the life-endangering scene, actually was done by one person I know against a younger sibling) is an extension of the assault on Gavin’s self-hood that dominates his entire being.

Btw, nothing “rolls out effortlessly,”

although the novel grew rapidly from 60k words to 100k thanks to Gavin’s inputs. The first part focuses on showing how the family dysfunction affected each member, then Devon’s narcissistic abuse and the Mob threaten Gavin’s sanity and safety; he escapes far away and for a while his life begins to feel “normal.” But not for long...

However, mystery will be the primary genre of Gavin’s sequel (the plot of which he has revealed to me), although the struggle for identity remains as the ultimate stakes.

FQ: You seem quite knowledgeable, as portrayed through the perspective of Gavin, about cookery. Is that part of your own past or present?

KAIN: Not particularly. I enjoy cooking and like to try new recipes (which I invariably alter in some way), especially when entertaining. Daily at-home cooking is pretty routine. I usually just throw something together at the last minute because it’s late due to getting lost in my writing.

FQ: Do you have a new novel already in the works (and if so, would you share a little “tease” about it), or will you turn your creative mind to endeavors other than writing in the near future?

KAIN: I definitely have a new novel in the works, and Gavin nags me mercilessly to make greater progress on it. The sequel has him reluctantly returning to Boston to “tie up loose ends,” where events will trigger him and show that a lifetime of abuse, plus the tragic traumatic event at the end of ‘Secrets’, can’t be expunged in “two months and a tattoo.” His wife Katie will have to pull him back from the brink with some tough love.

To the latter part of your question, my “creative mind” is limited to writing, interior design/decoration, and art collecting. But I can’t imagine NOT writing. I have a folder on my laptop labeled “ideas,” filled with snippets that inspire a story concept or wrinkle to one. Some spark one of those “what ifs,” some are poems that inspire or augment themes, some are new scientific discoveries or inventions that inspire science fiction stories! Inherent in all of these is the “what if” I had more hours in each day to write them

Thank you for these great questions that are specific to my novel & my writing (versus the “stock” questions I’ve been given in other interviews).

Posted by FeatheredQuillBookReviews at 2:14 PM