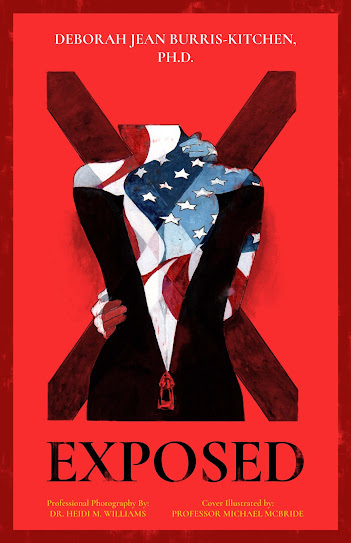 FQ: Your brilliant book confronts topics such as racism, violence against women, height-ism, and poverty — all big, complicated topics. What do you hope the reader will take away from reading Exposed?

BURRIS-KITCHEN: I hope the reader develops empathy for the other and has a better understanding of the negative impact and harm that dismissal of and hate of the other has on individuals and groups throughout our society. Its impact on self-hate, negative life decisions, etc. I also hope that it is a call for people to work toward loving each other more and creating a more just, fair, and civil society, one based on mutual respect, not jealousy and hate.

FQ: In addition to telling their stories and seeking support, what are ways women might reclaim strength after being violated?

BURRIS-KITCHEN: Sharing their stories publicly is the number one thing a woman can do after being violated. It allows people to understand the gravity of the problem and lets women who have shared similar experiences know they are not alone. They can also reclaim their lives by focusing on self-growth and self-love. Surround yourself with people who love you unconditionally and support your goals and dreams without criticism.

FQ: As a professor of Criminology, you have authored a book about women in gangs and articles about racism in higher education. How does the writing and photography in Exposed complement your other work for social justice?

BURRIS-KITCHEN: Even though this is not considered an academic piece, like my previous books and journal articles I have written as a scholar, it mirrors all my concerns and previous contributions made in my life as an academician. It will touch more people and have a more significant impact on our society in the direction of greater equality and respect for women and people of color. Academic books have a limited number of people who read them. Academicians share each other’s work. This book has a chance to touch the lives of a much broader audience with the same message about the pain and destruction all the isms have caused in our so-called democratic capitalist society.

FQ: Your poem “To Be Short, Blonde, Female, and White” is a powerful observation about misperceptions and misjudgment. What are ways Americans might transcend some old stereotypes?

BURRIS-KITCHEN: This poem, along with “Look Me in the Eyes,” calls for people to see people as individuals, not as stereotypes. It is too easy for us to pre-judge people as we interact with people we don’t know anything about. It is hard to do and takes work, but we must stop being lazy and get to know each other’s hearts, souls, and experiences. We are all in this world together. We all have struggles and a need to be understood as more than our exterior.

FQ: In Exposed, the fictional story "Short Changed" focuses on the theme of narcissism. Can you imagine any cure for that narrator’s narcissism? Is narcissism something that has become so pervasive that we all must learn to live with it, or is there a way to overcome narcissism?

BURRIS-KITCHEN: I hope that narcissism is something that we can overcome as individuals and as a society. It seems to be a pervasive problem right now. People don’t seem to be able to think about and feel for other people. We need to overcome this and start genuinely caring and asking each other questions that show we care and wait for and care about their responses. I have traveled to many countries all over the globe, and this is usually more common in first-world nations that ascribe to values of individualism. In contrast, countries that have a much lower GOP tend to be more communal in nature and understand the concept that it takes a village to survive. We need to work on promoting the message, as a nation, that we are indeed One Nation! What hurts one of my brothers or sisters also hurts me.

FQ: There are beautiful and powerful photographs throughout Exposed. Some feature models, some are still life photos of objects. Can you talk about taking these photos and how the images compare to the written work?

BURRIS-KITCHEN: I wanted the images to also tell the story presented in the poem. I wanted each image to stand alone but, simultaneously, make people think about the issue or topic in the poem.

FQ: In the poem, “Brittain,” you wrote these lines: “Who I am fits me like fine leather seats in an imported sports car / I am picturesque; I am love.” How does a woman confront life’s challenges and maintain inner strength that keeps her repeating, I am love?

BURRIS-KITCHEN: You must shut out all the negative talk and be strong in who you are. If it is right, believe in yourself and your inner and outer beauty, and do not let anyone get in your head and tell you otherwise.

FQ: In the story “The Final Beating,” the narrator documents incidents of repeated domestic abuse by writing it down. Can you talk about support for people who experience domestic violence, and how communities might cultivate more compassion and understanding to help heal domestic violence in our society?

BURRIS-KITCHEN: We have to change the culture of male dominance and toxic masculinity. Until women are portrayed as having and deserving to be treated with the same dignity and respect as men, we will never see a decrease in domestic violence. Until women are given the same opportunities to pursue their dreams and earn equal pay, there will always be an imbalance of power between men and women. And as long as men feel they are better than, more deserving, and rewarded as such, this is a battle we can never win. It has to start with the deconstruction of gender roles and gender hierarchy.

FQ: The powerful poem “September in Alabama, 1944” attests to the prominence of clan members still raping Black women in Alabama to this day in 2023. What about liberty and justice for all? How can women demand justice in this situation?

BURRIS-KITCHEN: They have to keep fighting regardless of threats of more violence committed against them. They must be brave and stand up to their perpetrator and the male-dominated justice system that still blames the victim for her assault. Again, this will come in time if we can deconstruct male dominance and hierarchy and end this oppression of toxic masculinity. This idea that women can be taken no matter if they say no has to end. No is no!!!! But many men still feel that they have a right to women’s bodies, especially Black women’s bodies.

FQ: Exposed contains poems and stories that continually promote the idea that knowledge is power. Can you talk about ways knowledge can help bring social change to the challenges of violent crime, sexism, and poverty?

BURRIS-KITCHEN: Knowledge is power, and power is knowledge. The more we know, the more power we have to determine what we can do with our lives and bodies. Without knowledge, we are powerless against those who have power and control the knowledge. Those that tell us what the social order should be, how women should act, who deserves wealth and power, etc. If we, as women, poor, people of color, etc., gain access to knowledge and learn to think critically, we can enter into positions of power that will allow us to legitimately deconstruct old versions of what it is to be male, female, Black White, Latinx, gay, straight, etc. We can write our history and build our futures based on what all the isms mean and how they harm our society (racism, sexism, capitalism, homophobia, and much more). If you have the knowledge, you can gain positions of power and use that knowledge and power to produce new knowledge.

FQ: Thank you for your time. Thank you for writing Exposed. It’s an important book from a courageous voice. Feathered Quill applauds your work. What will you write next?

BURRIS-KITCHEN: I am still determining what will be coming next. Thank you for this opportunity to discuss my new book and my thoughts and process.

Posted by FeatheredQuillBookReviews at 11:41 AM