FQ: I have a personal formula I use when I am about to read a fellow author’s work. I typically read the dedication first because it is my way of learning something about the author’s personality. I found your dedication to be extremely moving: “To all the men and women of the Armed Forces and to my daughter, Bailey, and the future generations that will succeed us in this world.” In that brief opening, I gleaned you were extremely proud to serve your country. How long did you serve in the U.S. Army?

I am still actively serving. I've been in nearly 18 years now, and I am planning to retire in the next couple years.

FQ: There is a humble and tender quality in the way you use your words. Sad but true, people are often viewed by the jobs/roles they hold in life. Sometimes the stigma of ‘soldier’ conjures a perception of macho. Would you mind sharing some of the feedback you received from some of your brothers in arms?

I have received nothing but positive comments and compliments from fellow service members and veterans so far. I have also been approached by family members of veterans as well to thank me for what I do. A lot of them say that I speak for so many military members and put in to words so many thoughts and emotions that others can't begin to grasp or understand.

FQ: I detect a note of struggle to the answer “why” when it comes to war; particularly in your poem “Crimson Rain.” Was it difficult to write this poem (and how long did it take to get the prolific rendition you delivered down on paper)?

Actually the poem "Crimson Rain" had nothing to do with my military experience. The idea was based on all the tragedy and senseless violence that the world sees on a daily basis. We always hear about school shootings and random acts of cruelty everywhere. I think I wrote the poem in about five minutes, after seeing one of these tragic stories on the news. When will it all end?

FQ: You dedicate your book to your daughter Bailey as well as the men and women of the Armed Forces. Would you encourage her to enlist some day?

My family has a proud tradition of military service. My dad was a Marine, and two of my brothers also enlisted in the Army, one of which is still serving. A few of my nieces and nephews have entertained the thought of joining as well. If Bailey decides to join some day I will support her 100%. I will not steer her in one direction or another. I will be proud of her no matter what career she decides to pursue.

FQ: There is a lot of positive inspiration in your writing. Do you ever tour and share your message with the soldiers? If so, would you care to share one of your most memorable moments in so doing? If not, do you have plans to do this at some point in time?

I try to do as many book signings, speeches, and other promotional events as I can. I try to bring inspiration and positive messages to everyone, not just soldiers. I write about so many subjects that pretty much everyone can relate to them. One moment that really sticks out in my mind was shortly after my first book was released. I was doing a book signing for that book, Changing Moods, and later that day a veteran who was actually in charge of a veteran's organization in that area, who had read that book, asked me if I'd be interested in giving a Memorial Day Speech. I was honored to give that speech.

FQ: What has been the most positive impact on you from your military experience? Why?


The fact that I know I'm making a difference and I'm doing so much for my country and my fellow man.

FQ: Do you envision yourself expanding your writing from poetry to a novel? Memoir?

As a matter of fact, I am currently working on a novel along with a few short stories. I'd also like to expand into songwriting as well.

FQ: During your tour, what area of the world was most difficult to assimilate to and (aside from being away from your loved ones), what comfort did you miss the most?

I would have to say that Afghanistan was the hardest place for me to adjust to. You never knew who to trust or what their intentions were. We even had to be leery of little children, which was heartbreaking, because they were so easily influenced by their surroundings.

FQ: Who has been the most positive influence in your life and what makes him or her “the one”?

My muse is my wife, Amanda. She has been my rock and inspiration in so many ways. Like I mentioned in the acknowledgement of my book, every love poem in the second chapter were written for and to her. I could not, or would I want to imagine my life without her. 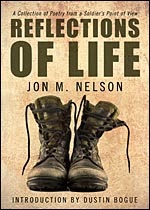 FQ: I thoroughly enjoyed your collection of poetry. It was very thought-provoking and at times, quite introspective. I cannot imagine you are not working on a new writing project. If you are, is it possible to share?

In addition to the novel and short stories that I mentioned earlier, I'm also working on my third book of poetry. This book will be a bit different than what my fans are used to. This new book will include story poems and a few poems that may be a little bit off the wall, but I'll still try to be inspiring and thought provoking with this new material I have written.

To learn more about Reflections of Life please read the review at: Feathered Quill Book Reviews.

Posted by FeatheredQuillBookReviews at 10:30 AM