Books In For Review

Here's a sample of the books that have come in for review recently.  Check them out and then stop by our site in a few weeks to read the reviews.  Enjoy!  :-) 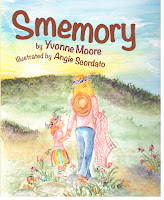 Smemory by Yvonne Moore "Smemory" is the story of a smell that lived in a garden and in the heart and memory of a young princess who danced there once with her queen. Summers passed, and one fall day the princess came alone. A tumbling tear, for what had been lost, touched the last pink flower pushing up through cracking cobblestone. Entering her nose, the smell's key touched the sleeping memory, and like the pages of a story book, opened a smemory.

The Depth of Grace: Finding Hope at Rock Bottom by J. Bronson Haley From street fights and seances to drunken parties and drug runs into Mexico ...J. Bronson Haley lived life so fast that he'd sometimes wake up in a jail cell without having a clue as to how he got there. As one of the most feared street fighters in Shreveport, Louisiana, Bronson had a reputation that preceded him-and usually made people get out of his way. But in spite of the breakneck life that he lived-and the tough childhood he'd endured-Bronson discovered Someone strong and loving enough to pull him out of the deep hole he'd dug for himself: Jesus Christ. Now, in The Depth of Grace, Bronson shares the highlights-and lowlights-of his life ... and he pulls no punches. All the raw, gritty details are here, showing how Bronson failed miserably time and again. Even more, though, Bronson shares the story of how, through Jesus Christ, he overcame his sin and struggles by the grace of God and the power of His Word. And as a bonus, Bronson offers you "Rest Stops" along the way-bits of what Bronson has learned from God's Word and how he found out that the heroes of the Bible were just as human, sinful, and in need of God's grace as we are today. So fasten your seatbelts for a wild ride that stretches from Louisiana and Colorado to Florida and Mexico-and all the way into the arms of Jesus Christ! Through this amazing story, you'll see that God's grace is always deep enough to reach us in our darkest hour if we hold on to Him and His Word!

Lioslaith: Last of the Painted Ones by George C. Myles Lioslaith, Last of the Painted Ones is a historical fiction adventure about 9th century Picts amidst the turmoil of events shaping the birth of the Scottish nation. It is the story of a spirited woman's struggle to rise above the brutality of the age and its prejudices. The mysterious customs of her thousand year old culture are buffeted by winds of change that propel her and her fellow Picts headlong to their destiny. Lioslaith struggles to preserve the traditions that define her while a formidable seafaring foe and a new religion sweep across her homeland. Power lust, treachery, and revenge combine to test the strength of love and the human spirit in a tale where lives and Scottish history entwine.

Dining at the White House: From the President's Table to Yours by John Moeller

Bible Bullies: How Fundamentalists Got The Good Book So Wrong by C. Arthur Ellis and Leslie E. Ellis Bible Bullies is a controversial new book that explores the nature of a special kind of bully: the kind who use the Bible to force or coerce others into conforming to their beliefs. The book identifies fourteen personality traits of these bullies, their tactics, and how they misuse the Bible to abuse children and attack identified “out-groups,” including women, the LGBT community, and social programs for the disadvantaged. Six of these personality traits were previously identified in a study, commissioned after World War II by the American Jewish Committee, to try to understand the mind-set of Europeans who supported Hitler’s atrocities. Chapters discuss misogyny, sexual diversity, child abuse, intelligent design, social programs, and family planning, in the process revealing specific targets of Bible bullies and their misguided use of Scripture in their assault on their victims. After identifying the salient traits of Bible bullies and how they attack their victims, the book discusses the bullies’ MO—how they operate. Not content with abusing just the victims in their own hometown, the Bible bullies seek to expand their personal power through political means, by arguing against separation of church and state and pushing for an exclusively Christian nation. The final chapters reveal the crucial rift in the New Testament that laid the groundwork for those seeking to distort the message of peace and love brought by Jesus.

Bristol House by Beverly Swerling In modern-day London, architectural historian and recovering alcoholic Annie Kendall hopes to turn her life around and restart her career by locating several long-missing pieces of ancient Judaica. Geoff Harris, an investigative reporter, is soon drawn into her quest, both by romantic interest and suspicions about the head of the Shalom Foundation, the organization sponsoring her work. He’s also a dead ringer for the ghost of a monk Annie believes she has seen at the flat she is subletting in Bristol House. In 1535, Tudor London is a very different city, one in which monks are being executed by Henry VIII and Jews are banished. In this treacherous environment of religious persecution, Dom Justin, a Carthusian monk, and a goldsmith known as the Jew of Holborn must navigate a shadowy world of intrigue involving Thomas Cromwell, Jewish treasure, and sexual secrets. Their struggles shed light on the mysteries Annie and Geoff aim to puzzle out—at their own peril. This riveting dual-period narrative seamlessly blends a haunting supernatural thriller with vivid historical fiction. Beverly Swerling, widely acclaimed for her City of Dreams series, delivers a bewitching and epic story of a historian and a monk, half a millennium apart, whose destinies are on a collision course.

The 25,000 Mile Love Story: The Epic Story of the Couple Who Sacrificed Everything to Run the World by Serge Roetheli The 25,000 Mile Love Story is a love storybut not a love story in the traditional sense. It is not just about a man and woman; nor is it just about a husband and wife. There are many people who can write that story. Instead, this is a love story that has lasted a lifetimea love for the worlds roads and all the people who inhabit them. You will follow Serge Roetheli through his childhood as an adventurer, through his teen years as a boxer, and through his adult life as a runner and mountain guide. As he writes in this intriguing memoir, You will sit by my side as I fell in lovenot once, not twice, but three times. And you will run the road with me on The American Challenge and The World Tour. Then, you will return with me to where I belong, and I pray that you will take away some life lessons and the truth I have come to know so well.

The S-Word by Chelsea Pitcher First it was SLUT scribbled all over the school's lockers. But one week after Lizzie Hart takes her own life, SUICIDE SLUT replaces it--in Lizzie's own looping scrawl. Photocopies of her diary show up in the hands of her classmates. And her best friend, Angie, is enraged. Angie had stopped talking to Lizzie on prom night, when she caught Lizzie in bed with her boyfriend. Too heartbroken to let Lizzie explain the hookup or to intervene when Lizzie gets branded Queen of the Sluts and is cruelly bullied by her classmates, Angie left her best friend to the mercy of the school, with tragic results. But with this new slur, Angie's guilt transforms into anger that someone is still targeting Lizzie even after her death. Using clues from Lizzie's diary and aided by the magnetic, mysterious Jesse, Angie begins relentlessly investigating who, exactly, made Lizzie feel life was no longer worth living. And while she might claim she simply wants to punish Lizzie's tormentors, her anguish over abandoning and then losing her best friend drives Angie deeper into the dark, twisted side of Verity High--and she might not be able to pull herself back out.

Shadow of Night: Book Two of the All Souls Trilogy by Deborah Harkness Deborah Harkness exploded onto the literary scene with her debut novel, A Discovery of Witches, Book One of the magical All Souls Trilogy and an international publishing phenomenon. The novel introduced Diana Bishop, Oxford scholar and reluctant witch, and the handsome geneticist and vampire Matthew Clairmont; together they found themselves at the center of a supernatural battle over an enchanted manuscript known as Ashmole 782. Now, picking up from A Discovery of Witches’ cliffhanger ending, Shadow of Night plunges Diana and Matthew into Elizabethan London, a world of spies, subterfuge, and a coterie of Matthew’s old friends, the mysterious School of Night that includes Christopher Marlowe and Walter Raleigh. Here, Diana must locate a witch to tutor her in magic, Matthew is forced to confront a past he thought he had put to rest, and the mystery of Ashmole 782 deepens. Deborah Harkness has crafted a gripping journey through a world of alchemy, time travel, and magical discoveries, delivering one of the most hotly anticipated novels of the season.
Posted by FeatheredQuillBookReviews at 9:21 PM