Interview with Tom Weston - Author of Feathered: Being a Fairy Tale

Today we're talking with Tom Weston, author of Feathered: Being a Fairy Tale

FQ: - Right off the bat, I would like to ask about the drawings in this book. Are they symbols for things from ‘Irish’ folklore? And did you do the illustrations yourself?

The images inside Feathered are from the Book of Kells. As that book is attributed to the monks of Iona and Kells, circa 800, the images are more than 1,200 years old. The Book of Kells is a good example of how Irish folklore developed as it did, in that although the Book’s text comes from the Gospels of Matthew, Mark, Luke and John, and is therefore Christian, many of the images in the book are derived from the earlier Celtic tradition. So for example, there is an image of a lion, which represents St. Mark, but its tail is tied in a Celtic knot. It’s this blending of cultures which makes Irish mythology so rich. 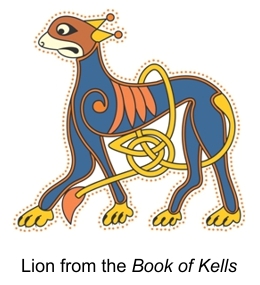 Some of the images represent stylized letters of the alphabet, A, B, C, etc. and in Feathered we used some of them at the start of each chapter.

The Book of Kells was produced by hand, both text and images, which makes it even more incredible. For Feathered, we used vector recreations of the images. As beautiful as they are, it’s still not the real thing, so I recommend that if you visit Ireland, a trip to Trinity College in Dublin to see the original book should be at the top of your agenda.

FQ: For readers who are already huge fans of your writing, when it comes to the hit you wrote in 2011, Fission, versus these adventures - do you have a preference when it comes to genre? Are you more into the historical world or the YA?

As a writing preference, the story of Lise Meitner was so compelling that Fission was more of an obsession than vocation. The Alex and Jackie books reflect my fondness for authors such as P.G. Wodehouse and Terry Pratchett, but they also reflect the joy I have at discovering these wonderful locations, Boston, Luxembourg, Ireland, and sharing those discoveries with the reader. Writing the Alex and Jackie books is like having great dinner conversation with an old friend.

FQ: Your descriptive phrases are so well done it feels as if we are all granted access to that “patchwork quilt of hero’s and shades of green…” that make up the Irish countryside. I would assume Ireland speaks to your soul? And, being a native, can you tell us if there really is an undercurrent of ancient singing that can be heard if you listen carefully?

I thank you for the compliment, for Ireland is a nation of great story tellers, and to be considered part of that is flattering, but I am English, not Irish. Please don’t hold that against me. My editor, Carmel, however, is Irish, and the inspiration for Feathered came from her stories of childhood in the Irish town of Fethard. I had the good fortune that my oldest friend, Mark, married Carmel, and that gave me the excuse I needed to visit many times.

But Ireland does speak to my soul, as does Luxembourg and Boston in the first two Adventures. Alex and Jackie allows me write about these places. I don’t know if the natives ‘hear the undercurrent of ancient singing’, but I do. I think I have the best of all worlds. As a tourist, we may know what a country or town has to offer, but it is of necessity a superficial knowledge. As residents, we have a deeper understanding, but we also become blasé to what is around us, and perhaps fail to appreciate it enough. When I research a location, I get to discover all this great stuff, most of which is under everyone’s noses, but somehow gets overlooked. It’s that voyage of discovery which I hope comes across in the Adventures.

FQ: Along those same lines…the facts embedded in your story, from the Vikings to ancient books, etc. - are truly amazing. From your youth, were you always a ‘research’ guru? Was the past of Ireland and learning about the wars, battles, castles, etc., a thrill?

Research plays a large part in my work, probably more than 50 percent of the total. I was always interested in why things worked the way they did, rather than how, whether it was a watch or computer, or a society. I generally have the who, what, where and when of a book before I start, but in everything I’ve written comes that big eureka moment when I discover the why and it always take me by surprise.

One of the thrilling things about Feathered was how the research kept coming up trumps whenever the story needed it, such as Dublin really being a Viking city or the origins of the name O’Rourke. I would say to my wife, Leigh, “You know, it would help if . . .” and, lo and behold, the research would oblige and we would say “OMG!” In fact, we had so many OMG moments on this book that we have come to believe that the fairies really wrote it, not me.

FQ: For all the conservationists, there is a part of your story that talks about the ‘fairy trees,’ in Ireland and how millions of Euros were spent to build a road around one to make sure that these particular trees were not knocked down. Is this a true point in Ireland? If so, can one assume that the government feels as deeply about their history as the people?

The story of the tree and the road detour is true; which goes to show just how seriously the Irish take their fairies, even the politicians. It sounds funny, but it does illustrate a couple of things. The first is that the fairy in Ireland means something different than it does in the rest of the world; in protecting a tree, they are not necessarily thinking of their environment, but of their heritage. Thanks to the Victorians, we get an impression of little, delicate creatures with gossamer wings. But the fairy of Irish mythology comes from the history which predates the arrival of Christianity; a lot of that history is of struggle and violent conquest. Second, and a reason the mythology is still relevant today, is that it wasn’t driven out by Christianity, it was woven to it, in that intricate, Celtic, knotty way. Part of the fun for me in Feathered was exploring those paradoxes.

FQ: I would assume (hopefully) that Alex and Jackie will continue on the road to adventure? Do you have any thought in your mind how many novels will make up the series?

The next book in the series will be set in Prague, in the Czech Republic, and it will be a horror story. As the stories are derived from the history and mythology of the locations, I’m not sure what they will be, but I do have several more locations lined up. My plans are for nine books in total. The first line in First Night is, “Everything is connected.” Although each story is a self-contained adventure which is not dependent on the other stories, the eagle-eyed reader will have picked up on some things which span the series. Hopefully, if I’ve done my job properly, when I finish the 9th book, the connection between them all will be established and a hidden 10th story will be revealed.

FQ: Living in Massachusetts (which is also quite green, to say the least), do you still visit home? And what is the thing you miss the most?

I get home to England once or twice a year. There was a time when I didn’t enjoy going back, for everything seemed so much better in Boston. But now, and I think that’s due to the perspective that writing the Adventures has given me, I really enjoy visiting. I see it in a different light. I’ve come to appreciate it, and I’ll admit to a pang of home-sickness at Christmas time.

FQ: Finally…many people truly want to know: Is a cup of tea the solution to all problems in Ireland?

It never hurts. In both England and Ireland, a cup of tea goes a long way to curing whatever ails you. Maybe that is the problem in Boston? We foolishly threw our tea into the harbor.

In Ireland they also have the medicinal advantage of Guinness. On one trip to Fethard, I ordered a pint of Guinness in a pub and waited for it to be served. The bartender, seeing the impatience of a novice, told me to take a seat and he would bring the drink to me when it was ready, for a pint of Guinness is not to be rushed, it will be ready in its own sweet time. So I sat and waited, relaxed and listened as the pub band play the traditional Irish music of the fiddle, drum and penny whistle. And finally the bartender served my Guinness. It was worth the wait. Like the pouring of the Guinness, things in Ireland happen at their own pace and it pays to go with it. I think if you substitute tea for Guinness the effect is the same. Either way, if you slow down and listen, to your friends, to the band, to the locals, to the storytelling, underneath you’ll hear the undercurrent of ancient singing.

To learn more about Feathered: Being a Fairy Tale, please read the review at: Feathered Quill Book Reviews.


Posted by FeatheredQuillBookReviews at 11:32 AM