Today we're talking with Jessica Chambers, author of Dark is the Sky


FQ: I have to know, how did this story begin in your mind? Where did the idea stem from?


Like many of my ideas, this novel began with a single character, in this instance with a vivid picture of a handsome, dark-haired young man. Immediately, I knew several things about him. I knew he was dangerously sexy, a magnet for women and more than a bit of a rogue. I also knew he was dead. This raised a number of questions. How did he die? Was it suicide, or murder, or merely a tragic accident? What part did his family play in his death? How has grief impacted on their lives? And as I unravelled the answers to these questions, the story gradually emerged.

FQ: The characters are all so different - from pale and frightened as a rabbit to strong and bold. Is there one particular character you liked/identified with the most?


Ooh, that's so difficult. I love all my characters, even the obnoxious ones. I'm not a mother, but I suppose it's rather like having children. You love them no matter what! In terms of the relationship I enjoyed writing the most, it was probably that between Joel and Tim. I loved showing the closeness they once shared, all the stronger for them being best mates as well as identical twins, and it broke my heart when I had to drive a wedge between them.

FQ: Complex relationships are usually extremely hard to put on paper in a way that allows the reader to understand every facet. And you're not even concentrating on one, but many. How were you able to make each one so concise? As a writer, do you lay out a 'game plan' on paper beforehand? Or, just head to the keyboard and begin?


First, thank you so much! It was certainly a challenge juggling so many complex relationships, working out what secrets to reveal when, so it means a lot that you feel I succeeded. I did have a pretty comprehensive outline before I started though. In fact, I've never yet attempted to write a novel without at least some idea where it's headed. I'm just not that brave! Of course, the story doesn't always go according to plan. Characters have a habit of taking on a life of their own and doing things I never expected of them, in which case I simply have to let them lead me where they want to go.

FQ: The story of Lottie and 'her secret love' was extremely interesting. Are you looking into perhaps writing YA one of these days? I think you have a gift for it.


That's really kind of you to say so, and funnily enough, I'm planning a young adult novel as we speak. I enjoyed writing Lottie and Adam's story so much, perhaps because our emotions are so powerful and all-consuming during that period between adolescence and adulthood. I also read an awful lot of YA fiction, so I suppose it was only a matter of time before I felt the urge to attempt it myself. 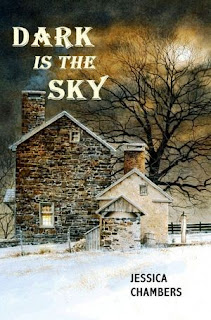 FQ: Phoebe is one of the most interesting characters I've run across in contemporary novels. Did she come from life? Are any of these characters based on 'real' people, so to speak, or are they all from your imagination?


Oh no, fortunately poor, put upon Phoebe is entirely the product of my twisted writer's imagination. Come to that, before writing Dark is the Sky, I would have had no hesitation in saying that all my characters are one hundred percent fictional. This is one of the things I love most about being an author, creating multi-layered characters that will hopefully stay with readers long after they close the book. However, when I wrote the wild, outrageously sexy Scott Cameron, I realized there's rather too much of my ex in him to be wholly coincidental!

FQ: Could you tell readers what you're working on now?


As I mentioned earlier, I'm leaving behind the familiar territory of adult fiction and attempting my first YA novel. I have to admit, it's a long time since I've been this excited about a project. I suppose it could be classified as young adult crime, exploring friendship, sexual identity and the different forms of abuse. Think the edginess of Melvin Burgess meets the emotion of Jennifer Donnelly, and you’ll get the general feel.

FQ: I hate getting this question as a writer (?) so I, of course, have to ask. Who is your favorite writer? If you could sit down with one author and have dinner, who would it be?


Hahaha! You're right, that is a tough question. Being a total book addict, I'll read anything from women's fiction to crime, historical to paranormal, and my favorite authors change all the time. If I had to pick just one though, it would have to be J. K. Rowling. The Harry Potter series is so skillfully plotted from start to finish, to the extent that apparently trivial details in earlier books turn out to be vital later on, and I'd love to pick her brains as to exactly how she pulled it off. Pure genius!

To learn more about Dark is the Sky please read the review at: Feathered Quill Book Reviews.
Posted by FeatheredQuillBookReviews at 8:17 PM