Today we're talking with Linda Boyden, author of Giveaways: An ABC Book of Loanwords from the Americas


FQ: Let me start out with the fact that this book was the perfect match with the reviewer – a celebration of words…I love that! I noted that you read the dictionary for fun and entertainment, wasn't it hard narrowing down which words to use? How, exactly, did you pick just one for each letter of the alphabet?


Great question, Amy, and you are right…I did have a wrestling match on my hands with this issue. However, my primary resource book for this project was not the dictionary (though it was a vital secondary reference). What piqued my curiosity initially was a lovely and geeky book, O Brave New Words by Charles S. Cutler. This delightful read turned me on to the vast contribution Native languages have made to American English. As a “recovering” teacher, I knew very well that many of our place names and state names were derived form Native words, but I did not want to use any of them. I had to resort to one, though, Fani Lusa Bayou, for the “F” page because the sound of F is not contained in most Native languages. 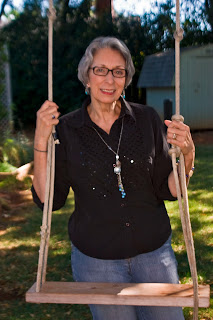 Further, I selected words that reflected the vast geographic diversity I was working with, plus I wanted to vary the categories from animals and food to weather patterns and myths. BTW, readers will notice I have two S entries: I couldn’t chose between them, so I sent both to my editor, Clark Whitehorn at the University of New Mexico Press and his team for final approval and they surprised me by allowing both!


FQ: I realize that you live in California now, however you were published by the UNM Press. Have you ever lived in the Land of Enchantment? Living here, myself, I find that the Native American culture inspires people a great deal with their writing.


Sadly, I have never been lucky enough to live in New Mexico. I did get to visit Albuquerque for a weekend during a Wordcraft Circle (an international Native American writing organization) writing conference a few years ago and was utterly enchanted. I agree the Native influence there is strong, as well as the Hispanic influence, of course. By coincidence, the illustrator of my first book, The Blue Roses (recipient of Lee & Low Books’ first New Voices award, 2000), Amy Cordova (who recently won a Pura Bupre Honor Award for Fiesta Babies, written by Carmen Tafolla) lives in New Mexico. Her Southwestern style of illustrating brought my words to life.


FQ: Frank McCourt once said that when he came to the US and walked into the NYPL, that was “it” for him. He couldn’t believe they would allow him to sit and read all day. In your bio I read that you had a similar experience with your first library card…showing you your path…could you tell our readers a little about that?


My hometown library is the Richards Memorial Library in North Attleboro, MA. It is still in operation and I visit when I go back east. I was a loner as a child and the library was my refuge. I’d walk there after school and on Saturdays and camp out in the Children’s Room to read, read, read! At that time, I read mostly fairy tales (The Red Fairy Tale Book, etc.) with a side order of the Bobbsey Twins and Little Women or anything that caught my eye. Every summer break my BFF and I would race to see how many library cards we could use up. This was in the late 1950s--60s when the dates of the checked out books were stamped on our library cards. I think one summer we each read over 50 titles and probably used up two or 3 cards.


As an adult, I still haunt my local library a few times a week. Nothing is more soothing than to wander the stacks and smell the good book smells. As author, Gary Paulsen says, “Read like a wolf eats.”


FQ: You write and illustrate children’s books, can you let us in on what the next one might be, or what project you’re working on now?


I am trying to cross genres and one of my current works-in-progress is a Middle Grade novel (for kids ages 8 & up) starring a twelve year old Cherokee boy who resents having to learn traditional Cherokee ways until he discovers he is the only one who can save his family, and maybe the whole world from dire circumstances. In it I weave contemporary Cherokee kids with traditional Cherokee customs and mythology. I also have an historical fiction biography and any number of picture book manuscripts in my queue. What I don’t have yet is an agent…sigh.


FQ: The research of these indigenous loanwords from North, South, and Central America was quite in-depth – even adding climates, first settlers, etc. Is your love of history as large as your love of words? (i.e. are you a history geek, too?)


Absolutely. I think in a previous life I was either an historian or a reference librarian. I love historical fiction and biographies of famous figures from the past. Did you know Richard the Lion-Hearted was wed to Berengaria of Navarre? She was reported to be of amazing beauty, though history records her as the queen who never set foot in England (there were crusades and Richard’s philandering to keep them separate). I wanted to give a daughter her beautiful name, but alas that got vetoed. Instead, one of our dogs received it.


FQ: On your website, and from your previous books, Native American culture is of great interest to you. Is that part of your own genealogical background?


Yes, though not enrolled in any Indian Nation, I am of Cherokee, Irish and French Canadian ancestries. I am a long time member of Wordcraft Circle of Native Writers & Storytellers, a great group of Native artists who work hard to keep Native storytelling traditions alive and well, as well as to provide a forum for Native writers. One of our goals is to return the gifts we have been given to others and particularly to the younger generation. Wordcraft Circle is committed to mentoring and supporting each other.


FQ: Book signings must be especially fun, because children are so inquisitive by nature. Can you tell us any stories about the kid's feedback? Is there something especially rewarding about writing for this age group?


I spent the first half of my life as a primary teacher, and so helped set many kids on their paths to literacy. Moving into children’s literature was a no-brainer for me because I love both the field and the age group. The rewarding thing? Kids are honest readers: if a book doesn’t engage them, bam, it’s history! On the positive side, if a kid loves a book, s/he will tuck it with them under their blankets, read it till the pages wear out and share it with friends.


Giveaways is still so new I haven’t had many school visits with it yet. However, last year I took a few illustrations along as a sneak peek. One little guy kept touching the I is for Iguana picture and complained, “But it’s flat? What? Why? How come?”


I explained my medium, cut-paper collage, produces a 3-D effect that copies in flat 2-dimenson. Copies do have shadowy edges. Because kids are all about touchy-feely, when their fingers feel the flat surface, they become flummoxed.


A poignant feedback happened after I read my first book, The Blue Roses (Lee & Low Books, 2002) to a group in Hawai’i. A little girl came up and hugged me and said, “I love this book, Aunty, because Rosalie (my protagonist) looks just like me. See?”


Traditionally, books about Indians have not portrayed us in a positive light. I am proud that my works do two things: 1. They help to dispel the old stereotypes about Native Americans that are still prevalent today so non-Indian kids gain new knowledge and 2. Native kids read them and feel more positive about themselves and their traditions (e.g. my second book, Powwow's Coming (UNMPresss, 2007) introduces the powwow tradition to young readers).


FQ: I have to ask, because you certainly opened the door, do you have a favorite word?


So hard! It’s like asking me what’s my favorite book or movie! Probably the one word that has changed my life most is: IF…that tiny word contains a vast world of possibilities.

To learn more about Giveaways: An ABC Book of Loanwords from the Americas please visit our website and read the review at: Feathered Quill Book Reviews.
Posted by FeatheredQuillBookReviews at 10:24 PM

Labels: giveaways: an abc book of loanwords from the americas, linda boyden