#BookReview - The Last War: Boo One of The Cynnahu Saga 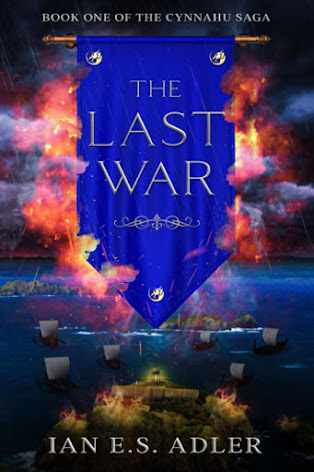 The Last War: Book One of The Cynnahu Saga

The Last War is the first book in The Cynnahu Saga by Ian E.S. Adler. Adler has created an epic fantasy world with the prologue providing essential background information and establishing the tone for a deadly conflict between the Naga, a serpentine race, and humanity. The stakes are high as the Naga are determined to wipe out humanity, and only ancient and powerful magic can save humankind.

Readers are immediately pulled into the world created by Adler with an attack by the Naga on Shrine Isle, one of the isles in The Archipelago of Cynnahu. The assault does not end on Shrine Isle. Ankohl Isle is the next target where the population is obliterated except for eleven-year-old Sakura. Volcan, a Fire Mage, rescues Sakura, whose life goes off in a new direction after the slaughter of her family. Meanwhile, eleven-year-old Emrys is attending a school on Eirias Isle when he makes a discovery that affects the trajectory of his life.

A team of five individuals is called upon to face challenges that will test their fortitude in an all-out effort to defeat the Naga and save humanity. The team consists of Archmage Hoth, the ruler of the Archipelago, Fire Mage Volcan, Traveler Myrriden, Sakura, and Emrys. The only way to defeat the Naga is by the incantation of a Calling Spell, the use of five Dragon Shrines, and the oral incantation by the team of five. However, there is an obstacle in the way of fulfilling their task as hidden meanings in ancient writings require deciphering before the magic spell can be put into play.

Adler has built a complex and detailed fantasy world full of adventure and excitement that keeps readers turning the pages. The author provides explanations of what people perform in their jobs that go along with their titles, such as Dragon Guardians, Isle Masters, Loremasters, and Mages, to name a few. A strong and ideal cast of characters who are dealing with grief, sacrifice, tricky interactions, and bravery in the face of overwhelming odds populate the story. The characters also undertake risks, whether it is being involved in battles where magic plays a part or in trying to overcome outside forces and internal challenges when it comes to solving the secret code in ancient writings.

The author has included helpful material. There is a map of the fantasy world, which is a handy visual reference for readers. The footnotes provide further information that supplements the text. However, the book could use better proofreading to catch grammatical mistakes.

The Last War is an excellent setup for the ongoing conflict between the Naga and humanity as the battle for dominance continues in the upcoming second book of The Cynnahu Saga, titled Dragon Guardians.

Quill says: The Last War is a gripping fantasy story that pulls readers into a magical world with nonstop action and suspense that revolves around an armed confrontation of epic proportions.

For more information on The Last War: Book One of The Cynnahu Saga, please visit the author's website at: ianesadler.com

Posted by FeatheredQuillBookReviews at 5:30 PM