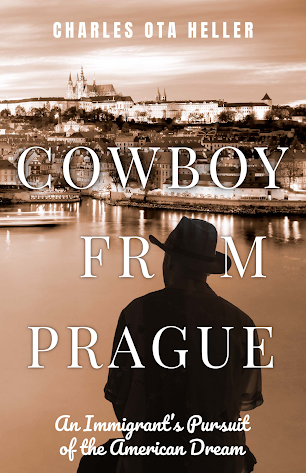 Cowboy from Prague: An Immigrant's Pursuit of the American Dream

From award-winning author Charles Ota Heller comes his newest memoir, Cowboy from Prague. This inspiring and triumphant tale chronicles Charles’s life, beginning as he and his family narrowly escape a ruthless Communist government in Czechoslovakia. Armed with their entire lives packed in just three suitcases, Charles and his family board a ship headed for America and the hope of the American dream.

At the tender age of 12, Charles is told by his father that their family will be leaving the country to begin a new life in America, and that he must be brave because they will be crossing the border and it will be dangerous. Despite this grim warning, Charles does not find himself frightened because he has full confidence in his father taking care of him and his mother. The escape itself is comprised of many steps, including spending one night in a hotel, abandoning their car in a field, taking separate busses, riding a train to a village near the German border and finally, walking three hours through a dark, scary forest. At long last, Charles and his family reach the US Zone of Germany and they are free.

Charles’s adjustment to life in the United States happens quite rapidly. The first summer of living there, his father sends him off to camp with a friend for three weeks. Charles is horrified at the idea of this as he does not yet speak any English, and he is afraid that the other kids will make fun of him for not being able to communicate with them. Surprisingly, the exact opposite happens. The other kids take Charles under their wing, encouraging him to participate in various activities and teaching him new sports. When Charles returns home from camp, he is able to speak rudimentary English.

As Charles grows older, he makes decisions regarding where to attend college and what sports to play at the collegiate level. Charles earns three degrees in engineering, including one at the doctoral level. Charles also meets and falls in love with Sue, who would become his wife in June of 1959. After a few years of marriage, Charles and Sue are thrilled to learn that she is pregnant, and will give both sides of the family their first grandchild. The happy couple is overjoyed to welcome their son in April 1964, but future challenges would emerge as they venture into parenthood.

Charles Ota Heller has truly achieved the American dream. He escaped from Communist Czechoslovakia as a young boy, coming to America with nothing more than what he carried in a few suitcases. He knew no English, and yet, he earned three engineering degrees, including one Doctorate. He has successfully sustained numerous careers, including those of an engineer, a professor, an author, an investor, and an entrepreneur.

Heller’s writing throughout is deeply engaging, as he invites you into his most personal thoughts and feelings. After reading this memoir, you will feel as if you know Heller personally. His writing is real, raw, often humorous, and vibrant. Heller is truly the epitome of a person who seizes the day and makes every moment count, and this is evident in his writing.

Quill says: Heller has penned a poignant, compelling story of one man’s grit and determination to make the most of his life, even during the most traumatic of circumstances. Heller’s dream to make it in a free country came true in more ways than he ever could have imagined, but through all of his successes, he never forgot where he came from.

To learn more about Cowboy from Prague: An Immigrant's Pursuit of the American Dream, please visit the author’s website at: charlesoheller.com.

Posted by FeatheredQuillBookReviews at 5:09 PM