#Authorinterview with Jo Ann Kiser, author of The Guitar Player 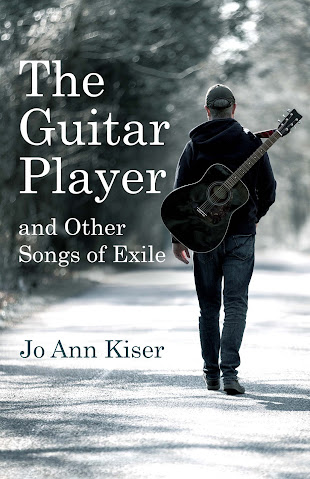 Today, Feathered Quill reviewer Barbara Bamberger Scott is talking with Jo Ann Kiser, author of The Guitar Player and Other Songs of Exile.

FQ: Have you recently traveled to or maintained any personal ties to Kentucky region of your heritage; if so, how has that affected your composition of these memory portraits?

KISER: We have several cousins left in east Kentucky with whom we are occasionally in touch. There is a standing invitation to stay at a second cousin’s house (unfortunately we have not yet had a chance to take him up on it) — he is now occupying the home of his parents, our mother’s niece and her husband, who designed and built the house, making it large enough to hold visiting relatives. It sits on a steep hill and there is a lovely picture window from which one can look at the lush hillside below. Behind the house are a garden and chickens. Last year when we visited him and his wife, it was spring and there was a bed of lettuce and one of onions ready to make an Appalachian delicacy: cut up lettuce and green onions straight from the garden tossed with salt and hot bacon grease. We also visited his sisters and, on our father’s side of the family, three cousins, two of whom live just below the graveyard and the other across the railroad tracks from where our papaw and mamaw had a general store. However the pandemic has curtailed our Kentucky trips, which had in any case diminished with the death of our parents and then, one by one, our aunts and uncles.

Just recently after the major floods in the area we managed to get hold of a cousin and partially find out how everyone was faring. The editor of the Mountain Eagle, in Letcher County, told me that the hills looked as though a rainstorm and a tornado had simultaneously swept down each holler.

My visits home, and my year of teaching at Morehead State University, along with the reviews of Kentucky books I did for a regional newspaper, have not so much affected as revitalized and given great poignancy to the memory portraits, but they have of course meant that I write more about the twenty-first century than I otherwise would have.

FQ: What single piece of advice would you give to someone preparing to read your work without special knowledge of its settings and timeframes?

KISER: The most important piece of advice, I think, is that they be prepared not so much for local color as for an encounter with the power of memory and loss as well as with how the stories’ characters establish their identity as they grow up and leave their natal region.

FQ: Do you have a favorite character among the ones you depict here?

KISER: I have several favorites: the guitar player, certainly, in the lead story; the mother, Laura Jean, in “Daughters”; the couple in “Tecumseh.” Others, too, like the hero of “Sunday Afternoons.”

FQ: Has your own transplantation to very different vistas given you insight into the homebound life of your characters?

KISER: I should say, rather, that, like my main characters, I have moved away and have learned to love other places, but that, as for them, a large piece of my heart remains in Kentucky.

FQ: What writer(s) influenced you most in the creation of this collection?

KISER: That is hard to say. I am an enthusiastic, eclectic reader. Most of all, I think, I have been influenced by Alice Munro, the wonderful Canadian writer whose stories often resound with the dilemmas of people in transition. Probably more than I am aware of, I have also been influenced by a certain kind of lyricism found in southern writers such as Eudora Welty. And, although my writing is very different from hers, I have been influenced by Harriette Simpson Arnow, the great east Kentucky writer who has never received her full due. Everyone should read her novel The Dollmaker, about a Kentucky family who lands up in Detroit during the Second World War. (There was a film made of it, with Jane Fonda in the starring role, back many years ago.)

FQ: Do you see parallels in current times to Kentucky coal miners’ struggles as depicted in your book?

KISER: If I may say so, the mine owners, many of them large companies whose headquarters are far from the hills, have for the most part exercised a strong adherence to the “bottom line” philosophy that afflicts our nation. In my grandparents’ time, the major struggle was to establish a union. In my parents’ time (as well as now), there was the black lung disease that killed off so many miners or else disabled them. In my time there have been strip mining and mountaintop removal which have uglified the physical and mental lives of east Kentuckians (much of the water, for example, is unsafe). In the meantime coal and related business interests have worked to keep the area a one-industry place. I think that most inhabitants know it is time to let go of coal mining, but what else is there? How do they feed their children if they let it go? Do they too have to leave home? (Somewhere along the way some official actually suggested that they be forced to relocate.)

FQ: Have you experienced the kind of fight for survival and striving for better conditions and education that some of your female characters experience?

KISER: Our family—there are nine of us children—had difficult economic struggles. Our father, a self-taught mine electrician, couldn’t always find decent work, and he was eventually disabled in a factory accident. I feel a strong kinship with most of my female characters. And at that, I have been one of the lucky ones. I landed up in my junior high years at a good school in the hills where I was one of the students in whom a great school administrator and an excellent teacher took an interest. Then in Ohio, the principal of my high school worked toward getting me a scholarship to a fine university.

FQ: Do you have plans for more writings of a similar nature?

KISER: I have almost completed a novel tentatively entitled A Young Woman from the Provinces, so yes I do. And I have written several chapters of a novel set in my parents’ time, as well as an earlier novel whose chapters are comprised of characters whose Kentucky stories are interlinked. (This last was the most experimental of my writings and did not meet with approval!)

Posted by FeatheredQuillBookReviews at 5:09 PM