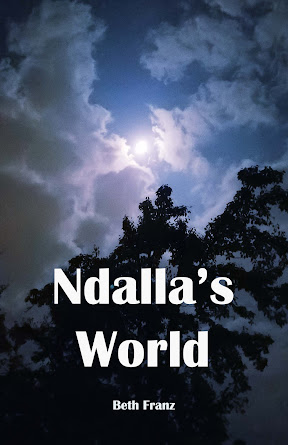 FQ: Have you had experiences like those Julia describes in the opening pages of the book - combining moon, music, and a bit of beer to ward off melancholy?

FRANZ: Not really. As I indicated on the acknowledgements page, the character of Julia was inspired by someone who had the gentlest spirit I’ve ever encountered in this life. She was someone very close to me, someone that I was fortunate to share my life with for ten years. She was a poet, someone who opened her heart to others, thereby leaving herself vulnerable to a tremendous amount of pain when Life took a turn she didn’t see coming. Focusing on that gentle and generous individual is what enabled me to find my way into Julia’s (fictional) story. More than once, I witnessed the magic combination of the moon, the music, and a bit of beer to … not so much ward off the melancholy...but rather, to try to face it and thereby move through it.

FQ: Do you have a conception for how Ndalla’s world and that of Julia are placed in time – i.e., which came first and how did one evolve into the other?

FRANZ: You know, I really don’t have a “conception” of how that all works. I wish I did, but I don’t.

FQ: What single piece of advice would you give to a person preparing to read this book with no previous knowledge of its content?

FRANZ: This book invites you to open your heart, and I hope you can do that. If you can, I think you will enjoy the journey! Not only that, but I believe that you will also be richer for the experience.

FQ: You use examples from the Bible to illustrate certain aspects of Julia’s beliefs – while for Ndalla there are the Forces – what does that connection mean to you?

FRANZ: Both Julia and Ndalla are talking about the same thing, right? They have different ways of talking about it, different “names” for things, but essentially, they are talking about the same thing(s). I believe Ndalla understands this before Julia (or the reader) is likely to understand it. That is why she is so excited to hear the words that Julia reads to her from the Bible. As Julia puts it (on page 57), “She had me read the verses aloud to her several more times so that she could commit them to memory and bring them back to her people: evidence, as she put it, that we, as a people shared the same ‘soul wisdom’ as her own people.”

FQ: How much of Julia (or Ndalla) is really Beth Franz?

FRANZ: Neither one is me. Julia has a much more gentle and generous spirit than my own, and Ndalla has much more courage and wisdom than I will ever have. That is why I enjoyed spending so much time with both characters. They are both characters I admire...for different reasons.

FQ: Would you describe this book as fantasy, sci-fi – or a combination of both?

FRANZ: I have a hard time with labels. I understand why we need them, and yet every time we try to apply one, it feels to me as though we miss the mark a little. Either that, or we send a message that because this book is “THIS,” it cannot be “THAT.”

I don’t know that this book fits under either label very comfortably. The label of “sci-fi” implies a lot more technical know-how than I am able to get on the page. And the label “fantasy” implies a lot more specificity and world building than I was able to achieve with this novel.

For me, the novel inhabits a space that is informed by a little bit of romance and a little bit of time/space travel, requiring the narrator to find her way forward in a world that she is struggling to navigate comfortably. For that reason, I’m tempted to label it an adult coming-of-age novel.

FQ: What female writers influenced/inspired you in composing this tale?

FRANZ: Dorothy Bryant is one writer who comes to mind. She had the courage to write in whatever genre the characters and the specific story demanded. I had the good fortune to spend a little time one afternoon with her back in the early 1980s, when I was still in my twenties. She was very generous, very encouraging, too.

Octavia Butler comes to mind, too. Her stories open up new realities for her readers. She gives her readers new ways of looking at the old problems. She creates new worlds and invites her readers, if we have the courage, to tackle the very issues that tie us up in knots in our own world, a world that is much too close to us to see it as clearly as we try to see it.

And of course, Willa Cather. She was my (writer) hero when I was in college. But just as Willa Cather had to wake up and realize she could not be her (writer) hero, Henry James, (and thank God she realized that and found her own voice and her own material), so too did I have to wake up and realize I could not be Willa Cather. There is something very “freeing” in realizing what we can NOT do. Maybe that’s the only way we can get on with figuring out what we CAN do!

So many other great writers of fiction whose stories have sustained me over the years: Amy Tan, Alice Walker, Katherine V. Forrest, Mary Renault, Rita Mae Brown, to name just a few.

FQ: Do you have plans for a sequel to Ndalla’s World, as seems suggested in the Epilogue?

FRANZ: It’s already in the works!

Posted by FeatheredQuillBookReviews at 4:52 PM