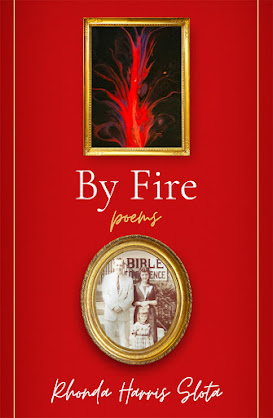 Poet and educator Rhonda Harris Slota revives memories of her childhood in rural Indiana, bringing to life her family members, especially her parents and her perceptions of them, in her collection By Fire.

The book opens with the announcement that “The Bottom Lands Are Flooded,” portraying her mother as distraught, a woman “who hates the wind.” Her father is highlighted next as “The Healer,” preaching and prophesying in church each Sunday, remote from his daughter and her siblings, obsessed with his role as a modern-day Elijah. Through Slota’s poems, deftly drawn in free verse, we learn that her mother wanted a son to replace one she had lost, and that she was always shunted aside for that reason. She knew that her mother sometimes tiptoed to a drawer where a picture of her brother in his coffin seemed her only solace. Slota describes in detail the rather harrowing experience of her “Baptism” by immersion in a cement font of holy water:

Emerging, I reachmy hands far up,crying with gratitude,as so many before me,water pouring down around me.

Her younger sister Annie becomes a beloved if frustrating symbol of how some might handle the disappointments conveyed to the youngsters, and her grandfather with his tales from olden times is an example of the almost enviable simplicity of life in earlier generations.

Looking to her future, “To Myself: The Child Who Hid in Closets,” Slota hints at the transcendental wisdom that she would later acquire to forgive her parents for their coldness, opining:

Two scenes complete Slota’s poetic memoir. In the first she watches as her father dies (“Letting Go”), recalling with compassion that “his passing does not leave a wound, but a softness...” Then she paints a picture of “Mother” engrossed in her farming work, as she “gives water to the parched earth.” Both depictions demonstrate her willingness to commemorate the past without blame, passing on only the best and most hopeful remembrances.

Quill says: Award-winning poet Rhonda Harris Slota has arrayed poignant, powerful childhood memories in this collection, with portraits of family that will burn in the reader’s mind like the fire of the book’s title.

To learn more about By Fire, please visit the author's byfirepoetry.com

Posted by FeatheredQuillBookReviews at 8:16 AM