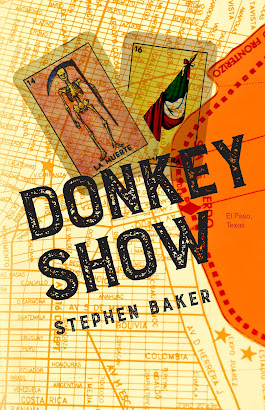 Donkey Show
By: Stephen Baker
Publisher: Atmosphere Press
Publication Date: March 31, 2022
ISBN: 978-1639882991
Reviewed by: Dianne Woodman
Review Date: April 10, 2022
Donkey Show by Stephen Baker is a rip-roaring adventure that keeps readers enthralled until the very last page.
A newspaper story credited to Tom Harley, a reporter for the El Paso Tribune, is the trigger that sets the main events of Donkey Show in motion. As a result of the Tribune’s front-page story, there is a physical attack on the newspaper’s photographer in Juarez, Mexico, and a death threat made against Harley. These actions lead to the Tribune gunning for a powerful Mexican drug lord who appears to be the one behind the assault and the death threat. Harley is tasked with finding out information that will aid in putting the drug lord in jail. However, Harley does not find this easy to do, as some of his findings come at a cost to his personal and professional life. More incidents involving Tribune employees keep the focus on whether the responsible individuals have any ties to the drug baron and his drug trafficking operation.
Politics play a significant role in this story with the clashing of two Mexican political parties and an impending critical vote on the North American Free Trade Agreement. Will the newspaper stories pointing at corruption in Mexico, the frightening incidents, and the drug lord’s influential status put an end to the passage of the trade agreement?
Baker has created believable and compelling characters with motivations that fit their personalities. Each of the characters has their own goals, and they are dealing with pressures from outside influences that stand in the way of their success. Their roles are essential to the storyline, whether in a disrupting or assisting capacity. The characters participate in dynamic interactions with one another and deal with debates in their own minds about what to do or think about the set of circumstances in which they find themselves.
Readers will enjoy this gripping story that shows how much influence newspaper articles, politics, and corruption can have on people and their actions. The chapters are short, fast-paced, and addictive. Donkey Show is full of enough action and excitement to leave readers wondering how things will turn out for the characters. The story alternates among several characters, and Baker does an outstanding job of not confusing readers when the viewpoint changes. Vivid descriptions and sensory details allow readers to picture scenes as they are taking place and transport themselves into the story. There is not an excessive amount of profanity, and it fits the personality of the characters who use it. The author includes Spanish words and phrases, which are italicized. Translations are either provided or can be figured out from context clues.
Quill says: Donkey Show is a story full of adventure, non-stop action, and political intrigue that grabs readers’ attention from the get-go.
For more information on Donkey Show, please visit the author's website at: stephenbakerbooks.com/
Posted by FeatheredQuillBookReviews at 4:33 PM