#AuthorInterview with Rhema Sayers, author of Wind Out of Time 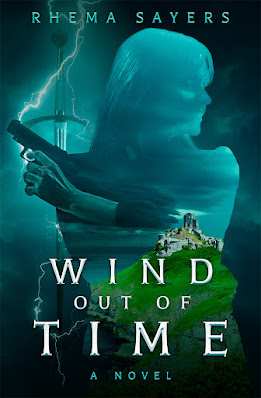 FQ: What was the reasoning behind your decision to write a story with your own interpretation of the Legend of Camelot?

SAYERS: I have always been very irritated with the Arthurian legends. Everyone is so noble and does all the perfectly wrong things, guiding them all down a road to disaster. They see it coming, but no one will use common sense.

I’ve always wanted to get in there and straighten that mess out. So I introduced a very common sense person in the form of a female FBI agent who is also strong, determined, smart, and can take on banshees if she has to.

Andrea rearranges the world of King Ardur (not quite Arthur) and wins the king’s heart. Some of her rearrangements are unintentional, but they are just as effective, either for good or bad.

FQ: What do you feel makes your story stand out from other versions based on Arthurian legends?

SAYERS: It has a happy ending. Did you ever read a version where Arthur, Lancelot, and a lot more people don’t die in the end and you walk away feeling depressed? That’s where mine is different.

FQ: Some of the characters are named after Arthurian characters. Why did you use some names from King Arthur’s time and create fictional names of other characters in the story?

SAYERS: The names of minor characters are not necessarily handed down over 1500 years. And many of my characters are my own creations, such as Aart and Tate, the thugs who turn into good guys, and Sarah and Julia, the maids/kitchen helpers. Most of the knights are named after someone in the Round Table. A few are fictional. Baron Claudius and his two goons are entirely fictional.

FQ: How did you choose Andrea as your main character? Is she based on a real person you know personally or as a passing acquaintance? If she was created from your imagination, how did you decide on her personality?

SAYERS: I was trying for a strong woman who was also flexible. She could find herself in the 5th century, meet King Arthur, throw a couple of knights around, and take over the kitchen while watching for the terrorist and making plans to free the serfs. The idea of turning her into King Arthur’s cook just came out of the blue. I hate to cook. My husband was a great cook and rarely let me in the kitchen.

Andrea knows how to make anything, given a few ingredients. It’s a way of breaking the ice between the two major characters.

FQ: What was the reason for your decision to have Andrea go back in time to the period of King Arthur’s reign?

SAYERS: The Wind sort of appeared in the story as I wrote it. I could see the mind-bending waves of color and non-color, faces, and scenes, hear the horrible cries and screams, and feel the plucking of the wind. Or is it the plucking of fingers or talons?

Once the Wind was there, it was obvious that Andrea was going to end up somewhere and somewhen other than the modern world she knew.I’ve always been a fan of Mark Twain. His play A Connecticut Yankee in King Arthur’s Court is delightful. And I could just see it – An FBI Special Agent in King Arthur’s Court. Why not? So I thought about the legends and about all the stories I’ve read. And I decided to change things around.

FQ: How did you come up with the idea for the method used in transporting Andrea and the killer to the world of Arthurian legend?

SAYERS: It’s a not-uncommon trope for a time portal. A wind, a gate, a door, a pool, a storm. Something that blocks your vision of the other side and pulls at you.

FQ: In the story, swords are given names. Did people give names to their swords in the medieval period?

SAYERS: Well, Arthur named his sword, Excalibur. The legends give us the names of other swords. Lancelot actually had 2 swords, Secace and Arondight. Galahad also had 2 swords – Red Hilt and Strange Hangings. Percival’s was Laevatein, and Gawain’s was Galatine (although this name may have been gifted to the sword by Sir Thomas Malory in his epic Le Morte d’Arthur). Other swords of the Knights of the Round Table were Grail Sword, Courechouse, Coreiseuse, and Clarent. Now don’t ask me the meanings of the names. Maybe I’ll get into that in the next book.

FQ: Were you familiar with the legend of King Arthur before you started writing Wind Out of Time? Did you conduct research for the story, and what methods did you utilize?

SAYERS: I’ve been reading about Arthur and Lancelot, Guinevere and Igraine, Uther and all the rest since I was a child. I loved the story, but every one of the stories I read were true to the legend and ended badly. Screw the legend. I wanted a happy ending. So in comes Andrea of ‘Merica.

I did a lot of research for this story and found out why many scholars don’t think that Arthur was real or was a composite of two or three warlords. Trying to pin Arthur down and find out what he did and where he lived is largely impossible. The stories vary and change even in the same tale.

I also looked up things like when was coffee introduced into England (Andrea really, really wanted a cup of coffee), when were stirrups introduced, and a plethora of other facts. I didn’t look up everything and got dinged in one review for not knowing that tomatoes and potatoes were not available in the 5th century. What can I say? It’s an alternate universe and I can put in tomatoes and potatoes if I so please.

I tended to get lost in the research, reading about the real people who populated our world in the 5th century.

FQ: You named the dogs adopted by Andrea after characters in Alice in Wonderland - does that story have special meaning to you?

SAYERS: I have read a lot of Lewis Carroll’s works, As Andrea is being led along the path by Baron Claudius and as she begins to suspect the impossible, all I could think of was one of Carroll’s poems. And I thought the naming of Tweedledee and Tweedledum, otherwise known as Dee and Dum, was a gentle stab at the males in the story. Even though they wouldn’t get the joke since the word dumb didn’t take on the definition of stupid until the early 20th century.

FQ: Are you planning on writing any more fictional books that involve legendary figures?

SAYERS: I am planning to make this book into a trilogy. Andrea, Ardur, Lancelot, and Guin have a lot more adventures to go through. Oh, yes. And Denim.

Posted by FeatheredQuillBookReviews at 5:00 PM