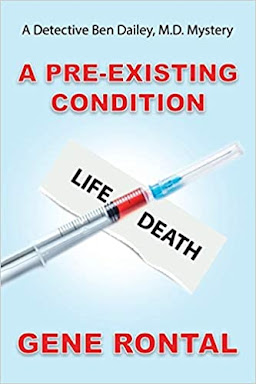 Ben Dailey is an MD who has taken on work as a Police Surgeon after his involvement in a crime that nearly destroyed him. Now he’s back in action and the threat is even greater – his family is being targeted in this latest offering by author Gene Rontal.

Dailey is drawn into this latest crime scenario by his trusted pal, Lt. George Sennett of the Detroit Homicide Squad. A young woman is in City Hospital on the verge of death from injuries caused by a fire at her home. Sennett calls Dailey in, but in spite of his best efforts, she can't be resuscitated. Her name is Sandra Wells and she works in the Mayor's office, where there have been some suspicious goings on of late. Dailey knew Sandra, treated her for some minor health issues, and recalls her unusual kindness to him. The cause of the fire is unknown...

There's something bizarre about Sandra's injuries: part of one of her fingers has been sliced off. The sliced off finger becomes a clue in yet another mysterious death, with further leads that Dailey and Sennett uncover indicating some kind of conspiracy among the city’s high level makers and shakers. It must be stopped, but the discoveries they make just don’t seem to give a complete picture, until a piece of paper, some sort of spreadsheet, comes to light. And disappears. And reappears, long enough for Dailey, with his wife Jordan’s computer savvy and his medical knowledge, to make sense of it. It’s a big complicated operation, with financiers at the top manipulating the profits and guys with knives doing the dirty work. But can Ben keep Jordan and their son Joey safe while he moves toward a solution?

A Pre-Existing Condition is part of Rontal’s series about Detective Ben Dailey, M.D. A former surgeon and current medical professor, Rontal is intimately familiar with the big streets and back alleys of Detroit, the book's setting. In this volume, he brings the reader up close to the protagonist’s personal life, revealing Dailey’s empathy for his beloved Jordan, who is continually steeped in sadness that she is unable to have a second child, and his love and indeed admiration for little Joey, a smart kid whose mental reach with his newfound cellphone toy may prove a life-saver. One vibrant subplot considers the choices and chances available to a young, desperate prostitute reaching out for help, while another links the first and last pages of this fast paced thriller in a most extraordinary way.

Quill says: Gene Rontal’s latest action-packed Ben Dailey whodunit will enthrall its audience with a wide variety of scene changes, from hospital bedsides to strip clubs to the enclaves of the rich and powerful, all in aid of tracking down a nasty killer and exposing the avarice of the men whose machinations include money and murder.

Posted by FeatheredQuillBookReviews at 7:08 PM