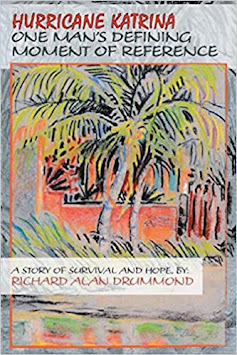 Hurricane Katrina: One Man's Defining Moment of Reference, is an emotional roller-coaster ride that will have you taking more than a few deep breaths as you move along. This comes from the fact that the author not only did an amazing job sharing his personal trauma and the choices he made, but also leads the reader into what can only be called a nightmare. The only problem is this moment in time was not a “horrible dream,” it was a very real one that he and many others had to live through on August 29, 2005. It was the reality of Hurricane Katrina assailing the northern Gulf of Mexico’s entire coastline—bringing with it harm, tragedy, and fear before leaving a broken community in its wake.

Mr. Drummond begins the story before then, however, and builds it in a way that will not only shock you, but will take you back to that exact period in time where you will serve as a real witness to the trauma that unfolded. Beginning on August 23rd, the author was utilizing his skills as a landscape architect to work on a project at a local congressman’s house. At this time, he was one of the ones curious about the path of this particular tropical storm, but more involved in his daily work and life.

Growing up on the Mississippi Gulf Coast, storm warnings were quite natural; hurricane season occurs each and every year, but this was one of those rare times when people were on-edge. It almost felt like some “impending doom” was circulating through their community of Biloxi. This was also the year (2005) that became recorded in history as being the most active hurricane season ever seen. In fact, it was only the next day, on the 24th of August, that the author noted residents and neighbors were visibly nervous as they watched this new storm begin to churn and gear up in the Atlantic, heading on a trajectory that led straight to their doorsteps.

The pages not only build with tension and suspense, but also offer information to help readers understand the intensity of hurricanes, while the author also “rights some truths” when it comes to the fact that Hurricane Katrina actually directly hit Biloxi and not New Orleans, which is what most everyone believes. Even though incredible tidal flooding and damage happened in New Orleans, it was ninety miles due east from them in Biloxi that took the first dead-on hit. The incredible loss for their community was beyond substantial, even if the mainstream media didn’t directly focus on them.

The drama and incredible emotion does not only stem from the impending storm, however; it also comes from Mr. Drummond’s own personal story. He was a man already dealing with depression in his own life. He opens up about the fact that he was in the early stages of divorce and dealing with the pain that comes from that when Hurricane Katrina was getting ready to hit. So not only does the tale place readers in the eye of this frightening storm, but the combination of Mr. Drummond’s own trauma and pictures (i.e., submerged cars in driveways; water lines on houses that climbed to terrifying heights, and more), make this a unique, emotional perspective. From National Guard soldiers trying to bring safety to the town, to the shocking amount of work that came from having to clean up and attempt to restore homes, you learn of the strength and power these people had to come together in order to rebuild and move forward.

The author’s own world is also changed after the storm. Beginning when he was physically hurt and had to go on drugs in order to help himself get through the day, he goes on to unveil the difficult path he had to take through disintegrating relationships and the increase of drug abuse through such horrible times. He offers hope to those who need human kindness and comfort, and explains how even though the tolls in life can be high, a person can be saved just like a community can. This is a true story of survival and how one man found a way to be happy.

Quill says: Like a dramatic action movie, but mixed with pure emotion, this book will leave a lasting imprint on your mind and heart.

Posted by FeatheredQuillBookReviews at 10:17 AM