#BookReview - The Girl in Cell 49B 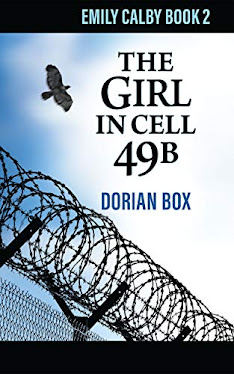 The Girl in Cell 49B (Emily Calby Series Book 2)

Dorian Box launches Book #2 in his “Emily Calby Series,” The Girl in Cell 49B, and the hits keep coming.

Emily Calby is the sole survivor of a home invasion that took the lives of her mother and sister. There’s no time to count her blessings that she survived. It’s time for Emily to disappear...forever. Exactly where does a twelve-year-old disappear to once her family is brutally murdered? First things first. Emily Calby no longer exists. The rest will work itself out.

Alice Black is tough. She’s had a rough life and if it weren’t for Joseph Black (a/k/a Lucas Ellington Jackson - forger extraordinaire), Alice wouldn’t be celebrating her sweet sixteen. A lot has happened to Alice between twelve and sixteen. For starters, her name changed from Emily Calby to Alice Black thanks to ‘Lucas.’ Alice is the polar opposite of who Emily used to be. Alice is a badass and nobody messes with her. However, Alice can’t take all the credit. Kiona, Lucas’ wife, just happens to be a boxing trainer to some of Las Vegas’ finest fighters. Wide-eyed and innocent Emily is about to experience the metamorphosis of a lifetime at the end of her training road with Kiona. It was the last piece of transforming Emily to Alice and putting Emily to rest once and for all. If only Alice would learn how to think before she acts...

I have to say, Dorian Box knows how to spin an adventure through artful word placement and the right amount of flair to keep the story moving forward. Here’s my issue with authors like Mr. Box. I pick up the second book in his Emily Calby Series and my first inclination is: ‘...am I going to be able to engage since I haven’t read the first...’ Suffice it to say, having read The Girl in Cell 49B (in one evening), I am on a quest to read many more books by this author. It never ceases to amaze me the amount of raw talent that is in the writing world and Dorian Box deserves to hang his shingle front and center in such a group. The characters are credible, and the dialogue is natural. There are multiple scenes throughout where Mr. Box places his audience in the moment. He doesn’t overdo it with embellishment. Rather, he has mastered the art of show; not tell. Well done! I am a fan.

Quill says: Sometimes completely erasing the past has a way of rising again with greater force and propensity the next time around.

For more information on The Girl in Cell 49B (Emily Calby Series Book 2), please visit the author's website at: dorianbox.com

Posted by FeatheredQuillBookReviews at 9:22 AM