#BookReview - The Engine of Survival 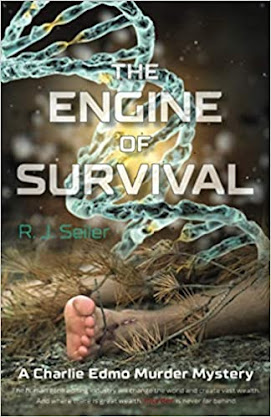 The Engine of Survival (A Charlie Edmo Murder Mystery)

Everyone vies for a perfect body, a perfect mind, a perfect life. But how far is one willing to go down that road? Is genetic enhancement really the road to happiness, or is it a monster lurking in the distance, waiting to attack when the time is right?

Quinn Conner, a 22-year old genetically-enhanced male, was found dead near his father’s property after attending a company holiday party. He was the second son of Henry “Hawke” and Abby Conner, and the younger brother of Alex. Hawke is the founder and CEO of Genetic Services International (GSI), working closely with his best friend Gordon Kelly, who started Genlabs, a subsidiary of GSI. These two gene kingpins earned billions when the age of genetic enhancements boomed.

Given his social status and being the iconic second-generation designer baby, Quinn’s death calls the attention of the federal government that decides to keep it from the public for now. FBI Agent Charlie Edmo, the assigned chief of investigation for this case, suspects that Quinn’s death is not of natural causes, looking at how the body was moved and potentially targeted a few days later, under the guise of a terrorist attack.

That aside, several more second-generation genetically-enhanced males have been reported dead under the same suspicious conditions. Consequently, the FBI taps the help of Drs. Lois Peck and Marion Harper of the CDC to look for results. During the investigation, a classified report comes to the surface which might be the motive for killing Quinn. It might also have the answers to the other suspicious deaths...

The suspense begins right away in The Engine of Survival with a heart-racing scene. Set in 2050 with a diverse set of characters and a generally engaging plot, great imagery slowly fills the senses. Though the pacing takes its time, the world-building is impeccable. However, over time the long backstories do not seem necessary. While a story’s foundation is incredibly important, writing too much of it bores the audience, especially those who just want to focus on the current proceedings.

Quite a number of typos and a few inconsistencies have been found. Sentence construction on some lines can definitely be improved. There are instances where certain words and lines are repetitively used, much like an annoying advertisement. Likewise, character names are also repetitive (there are two Henrys and two Franks), leading to confusion. Some are also hard to differentiate from one another as they often start with the same letter (Ben, Brad, Brent, Anna, Abby).

Although the book is set in 2050 and tackles futuristic social issues, these scenarios, to be honest, are not far from today. Typical to its science fiction nature, Seiler gives a clear understanding of how things can greatly improve with technology, and how badly things can fall apart when it fails. As with everything else, the higher the flight, the harder the fall.

Quill says: The Engine of Survival entertains but fails to captivate completely.

Posted by FeatheredQuillBookReviews at 9:38 AM