#BookReview - Complicit (A Legacy of Silence) by Amy Rivers 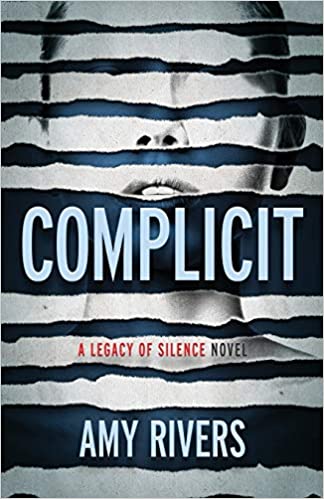 Complicit (A Legacy of Silence)

Award-winning author Amy Rivers creates and gradually untangles a complex story of hometown horror, family dysfunction, and the triumph of determination over decadence in the first book in her new Legacy of Silence series, Complicit.

Central character Kate Medina is a school counselor in her childhood home of Alamogordo. She talks to troubled teens at work, and cares for her father Frank, who is slowly dying of cancer, when at home. Her profession allows her to do some good, but there are girls who seem to need extra guidance, and refuse to take it when offered. And Kate has old traumas to deal with, having left her former, and highly desirable employment as a prison counselor after being the victim of a brutal attack. And there’s her younger sister Tilly, whose avoidance and sarcasm make Kate feel like the good sister, though, frustratingly, Frank always seems to side with Tilly.

When a teenaged girl goes missing, reviving Kate’s memories of a terrifying experience she had as a teen that has haunted her ever since – she and her pal (but not boyfriend) Roman discovered a charred body in a car, a mystery that was never completely solved. Now it seems, the two of them may have to collaborate, since Roman is a police detective and needs to mine Kate’s professional observations for any slightest clue to the missing girl’s background, mood states, and possible whereabouts. Together Kate and Roman will uncover a web of evildoers among the town’s elites, putting them both in jeopardy.

Rivers writes with skill and art, putting us squarely in the scene and inside the mind of her heroine. Kate is a strong woman trying to be stronger, overcoming harsh memories as she learns to empathize with other victimized females, many of them young and all systematically abused, right in her own, supposedly safe hometown. She must deal with conflicting feelings and with some scurrilous players who seem to hold all the cards. Even with Roman’s support, it’s a tough position to be in, made more so as the two find themselves becoming more than pals, but still reluctant to make a full commitment. This book is denoted as the first of the Legacy of Silence series, treating in this volume with the wide and often hidden activities of sex traffickers. Readers will hope that Kate and Roman will return again in partnership to battle crime and abuse wherever found.

Quill says: Amy Rivers has outdone herself with Complicit, a far-reaching, imminently relevant look at covert conspiracies and sisterly secrets in small town America. Her fans will be watching for the next in her Legacy of Silence series.

For more information on Complicit (A Legacy of Silence), please visit the author's website at: www.amyrivers.com.

Posted by FeatheredQuillBookReviews at 9:30 AM