#BookReview - The Battle for Trimera 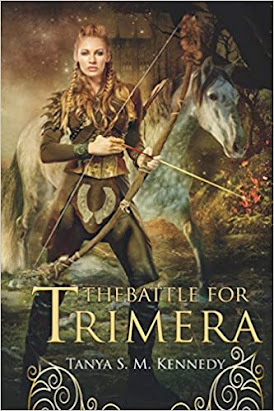 The Battle for Trimera: Book 1 of the Ruling Priestess

From the very minute of her birth, Princess Pria was the most cherished daughter of the ruler in the kingdom of Trimera, Prince Inan, and his wife Isala. In fact, she wasn’t just merely showered and spoiled with love and affection as most princesses are, she was particularly special, and fiercely protected by her family and their servants, because she was uniquely born to become a high priestess; a leader and chief advisor to the ruling prince. While her older brother Janu filled his days studying and focusing on becoming the future prince, Pria frequently practiced her skills with the high priestess Lana, but always with the specter hanging over her head that she must some day leave her beloved family and city, and go away to the Lorien where the high priestesses could further her education. Though Pria excelled in her skills, training for many years into young adulthood at home in Trimera, and despite her and her brother’s constant protestations against Pria being made to go away to complete her training, it became apparent that if she was to not only advance in her teachings to the highest levels, but to keep her safe from herself, she had to move to the Lorien. So reluctantly Pria went to live in the Lorien, and continued to improve her priestess skills.

While the princess is spending countless, and sometimes frustrating, hours increasing her expertise, something strange and sinister is happening; nearby towns are coming under attack, and citizens are being slaughtered. Unfortunately, the people are used to protecting their borders for centuries from the horrifying grinlo, creatures hell bent on expanding their territory. However, the normally simple-minded and easily stopped grinlo are somehow mysteriously morphing into a shockingly cunning and vicious creature, and have now been successfully destroying the once-protected towns. Townsfolk are disappearing, and Prince Janu must swiftly gather his forces, and devise a plan to put a stop to the grinlo destruction before it’s too late, and they make their way farther into Trimera.

Meanwhile, years have passed, and once an inexperienced young princess, Pria has studied and practiced for long, difficult hours, and has finally fully become the high priestess she was destined to be. She is eager to not only put her skills to use, but to return to her beloved home. This fortunately couldn’t have come at a better time, especially considering the fact that the Kingdom of Trimera is under attack and they’ve been without the guidance of a high priestess for years. Once Pria learns her homeland is in desperate need of assistance, she is determined to return to provide much needed leadership and protection, and to determine who or what is causing the grinlo to behave so violently. However, the elders at the Lorien don’t all exactly agree that Pria should be assigned to her hometown. Some believe she won’t be able to properly balance her powers and duties as a high priestess, with the love and loyalty she has for Trimera and her family. After some negotiations, and with the greatest amount of courage and determination, Pria vows to take her assignment very seriously, and prove to all the naysayers that she has the fortitude to lead and protect Trimera. But will she be able to put a stop to the grinlo advancing upon her homeland, or will she be too distracted by her family?

Writer Tanya S.M. Kennedy presents to readers an exciting and fantastic new world in the first book of the Ruling Priestess series, The Battle for Trimera. Though the novel is quite extensive, and is definitely not a quick read, it is filled with a wonderful story, with motivating themes such as perseverance despite seemingly insurmountable obstacles. The characters are well thought-out, and so likable that readers will easily find themselves rooting for the successes of the good, and despising the evil. Most importantly, there aren’t too many characters crammed into this story unlike some novels, particularly in the sci-fi and fantasy genre, that have a tendency to go overboard with a multitude of characters, and sub-characters that, in the end, usually confuses and frustrates the reader. Finally, the pacing is also great, keeping readers interested throughout the entire story right from the sorrowful, bloody beginning, to the epic cliffhanger ending, with a little bit of romance sprinkled in the middle.

Quill says: The Battle for Trimera is an excellent debut of a new epic fantasy series, The Ruling Priestess, that is sure to captivate readers of this genre.

For more information on The Battle for Trimera: Book 1 of the Ruling Priestess, please visit the author's website: www.tanyasmkennedy.com

Posted by FeatheredQuillBookReviews at 11:05 AM