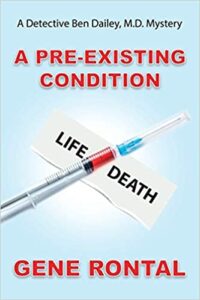 FQ: How did you organize your time and energy to compose the book, given what must be a very busy life as a professor? 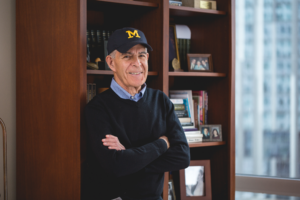 RONTAL: I had often thought that in spite of reported safety of patients’ medical records, there is always the human factor that could make those records exposed to a criminal who could use them for nefarious purposes. It wasn’t until I read about viaticals, that I found the vehicle to create a plot. Once I had that plot, I was hooked. It had the one thing I always admired in mysteries – the momentary suspension of disbelief. The idea that this could possibly happen. At that point, I knew I had to write it. I would write at night or early in the morning. I am very lucky that I have an understanding wife.

FQ: How much of Dailey is really you?

RONTAL: I think every book that has been written reflects, in some way or another, the personality and thought processing of the author. The medical portions of the book are certainly reflective of my experiences as a physician. Illnesses are often a mystery. Like a detective, the doctor has to put the clues together to solve the problem. On the other hand, I am not an action hero. Even at my best I probably couldn’t do what Ben Dailey does.

FQ: Do you see our current world, with Covid and other factors, the possible development of such elements as the manipulation of medical data as depicted in this book?

RONTAL: It has already happened. The use of “runners” in hospitals to bring medical malpractice cases to attorneys, stealing of medical information and hacking into patients’ electronic medical records. It has been done a number of times.

FQ: Which episode in this wide-ranging story was the most compelling to imagine and compose?

RONTAL: Giving a novel a satisfying ending is often the most difficult part of writing a mystery book. I believe the “Epilogue” in A Pre-Exisiting Condition was the most compelling to imagine and compose. A frozen embryo mentioned at the start of the book, becomes an unexpected gift to deserving parents.

FQ: What writer, modern or classical, of whatever genre, influenced you most in the creation of this series?

RONTAL: As a kid, I read Sherlock Holmes. I was riveted on Conan Doyle’s ability to make his mysteries real. That is always my goal when I write a new book.

FQ: Could you envision a documentary comparing your own life experience and that of Ben Dailey, as a companion piece to the book?

RONTAL: I don’t know whether anyone would find it interesting. My struggle to become a doctor was not easy. Like Ben Dailey, I always had to work hard to get my education and become a physician. English wasn’t my strong suit. At least that’s what my teachers and professors told me. I was always a “science kid.” The only bad grade I got in college was in English. I might not have been good in English, but I always had an imagination. One day I was telling some friends a story from the hospital. After I finished, one of them said I should write a book. The idea that I should write a novel was suddenly liberating. I must have wanted to do it all my life. Like Ben Dailey, perseverance usually wins out.

FQ: Did you find the composition of this book to resemble in some ways the skills of a physician diagnosing and treating?

RONTAL: As I had mentioned, being a physician is like being a detective. There are two types of medicine. One is empiric medicine, where you find certain things about the patient that allow you to think of a diagnosis. This type of diagnosis is not always correct. Then there is evidence-based medicine. Those are diagnoses based on hard facts, like a patient with a sore throat has a throat culture that is positive for Strep. With a positive culture you can give the correct medication. I always look for the facts. The same thing applies to my books. As I mentioned, when I write, I value the idea that the plot in the book could actually happen. It’s all about the evidence.

Posted by FeatheredQuillBookReviews at 12:03 PM