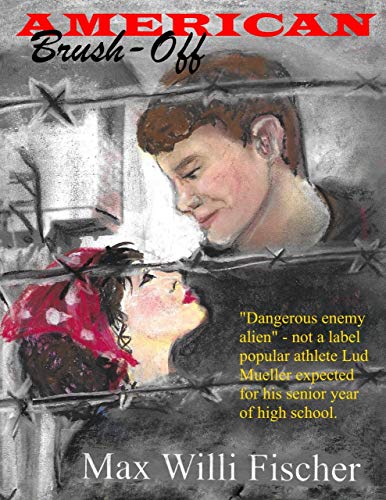 Readers, in this book the author has given me two things I absolutely treasure: Great characters who I want to see end up happy; and, the backdrop of WWII. Enough said? Of course not. I know all of you aren’t like me. (You silly people, you.)

Lud Mueller is one of those uber-popular senior high school students who are chosen to be in at least 75% of the pictures in any yearbook. Great in sports, nice to look at, and even has a “true love” that’s just about the best marrying material you can possibly find. In other words, Lud is the epitome of ‘All-American.’

Now, Lud’s parents emigrated from Germany. They are also about to be utilized in a government war strategy in this year of 1942. Lud is seventeen-years-old with his whole future ahead of him. Suddenly, however, the world begins to turn and Lud is suddenly surrounded by the worst aspects of humanity one can find (and can still find, unfortunately). Lies and gossip stand where due process and the law once held office; everyone hates everyone and innuendo is what people use to base the bigotry and needless violence on that crops up across the nation. This is most assuredly not what Lud thought his next step in life would entail.

Even Lud, himself, has turned in the eyes of his hometown. Simply because of the generations of his family that came before, Lud has transformed from a great guy into a “dangerous enemy alien” in the eyes of his friends and neighbors. Now, exceling on a sports field just doesn’t matter anymore. What Lud will have to do is use that brain of his to get out of the situation the world’s mindset has placed him in.

Thrown and interned in the desert of Texas, those annoying, frustrating Nazi fans want to make Lud and his family absolutely miserable. Lud even opens his heart in the Lone Star State to someone and ends up having it all come crashing down because of government influence. When Hitler is finally trounced and America is considered one of the heroes who’ll make life good again, Lud should see a new path to walk down when it comes to his future, career, and restoring his broken heart. Unfortunately, just because Lud has a new outlook on life doesn’t mean the government shares that same sentiment.

Remember, this is not a new ‘occurrence’ in our government...the higher-ups separating loved ones just to then ‘brush the incident’ under a carpet and forget all about it. Not only is this powerful book based on the very real-life internment of thousands of absolutely legal German aliens and German-Americans during WWII, but it’s also written by a gentleman whose own parents emigrated to America after Hitler was shown to be exactly what he was—a natural-born loser.

The story kept me enthralled through the entirety of the book. There was a point where I was deeply saddened (but won't give away the plot point), and I was rooting through this whole thing to see Lud gain the strength and wit he needed to overcome what the government and others were unfairly doing to his family. I do have to say one of the greatest moments I’ve experienced in a book in a long time came about when Lud set his eyes on a very great icon—a perfect greeter for those who wanted nothing more than to live in this amazing country. At this moment, Lud was truly emotional, and it’s a given that any reader’s heart will be struck by the compelling, brutal, and riveting moments this book possesses throughout.

Quill says: A striking read making you a bit frustrated that time has moved forward, yet games are still being played.

For more information on American Brush-Off, please visit the author's website at: maxwilli.weebly.com

Posted by FeatheredQuillBookReviews at 11:35 AM