FQ: This was a wonderfully captivating (and written) novel. I’m curious, given the depth devoted to the development of each character, how much of the work is ‘real’ versus ‘fiction’?

DE SMET: My characters are primarily created from my imagination, but some characters have similarities to the people in my life. Reid, Emily’s boyfriend, was created as a non-stereotypical boyfriend with no ties to anyone in my life. Perhaps he’s the boyfriend I had wished for. Robert, Emily’s brother, has similarities to my two brothers in the sense of loyalty and intelligence. Pudge, Emily’s friend, is the friend I would have wanted in my childhood. The mother is someone I created from my imagination and I have never known anyone like her. Emily is the character that I most relate to. I had difficulties with identity as a child and young adult and never felt good enough. I spent a lot of time alone and used my imagination as an escape. Like Emily, I played the “I’m okay” mantra and didn’t want anyone to see my pain. There is a section in the book where Emily ditches her friend Pudge in the cafeteria and goes to play with the popular crowd. She didn’t want to anyone else to know of her torment at home. When lunch was over, she looked around for her friend, Pudge. She was angry with herself and said she felt, “as phony as a Godless prayer.” I have felt that way too.

FQ: Once you were done with the writing process, was it difficult to begin working on your next project? How much of the story lingers in your memory and does it impact your ability to move on and focus on your next body of work?

DE SMET: So hard! I lived with my characters for three years and they were real to me. I would talk with my daughter about the book like we were discussing flesh-and-blood people in our lives. When the final edit was completed, it was like a death for me. I didn’t want to let them go and missed writing scenes every day. Pages in the Wind was a three-year work, so they were deeply woven into my life. I was most attached to Emily because of the similarities of our lives, but Doctor Lieberman had my heart! I loved the man, and could visualize him. The doctor was the grown-up version of me as a child, explaining why I took a certain path or felt inadequate at times.

FQ: The mind is an amazingly powerful tool we humans house between our ears. During your writing, did you engage with professionals at any time to capture the essence of the sessions between characters Lieberman and Quinn?

DE SMET: No, I didn't other than medical research. Interestingly, when the novel was finished, I started getting nervous about how the psychiatric community would feel about the novel. Did I make mistakes in psychiatric terms and the like? Did I stereotype? One weekend, I wrote three psychiatrists, none of which I knew, and asked if they would read the book. One doctor wrote back right away and asked to read the entire book. He loved it! He wrote a wonderful testimonial for which I am so grateful. His name is Rodrigo Munoz, M.D. and Professor of Psychiatry and the University of San Diego, California. He was also the former President of the American Psychiatric Association. I feel blessed that he took the time to read the book and give me an endorsement.

FQ: How difficult was it to decide to make Emily the murderer of her father? Was it troublesome to write her experiences of facing the consequences of her actions (and if so, how did you overcome your own emotions and channel her character to do so)?

DE SMET: It wasn’t difficult, really. I wanted her reactions to be true to her character, and it was important that the consequences make sense in terms of her connections to her family. Emily had very little support, other than her grandma who she lost too young. Her brother was a support but they didn’t live the same childhood, which validated her feelings of self-hatred. They were close, but tended to talk in code. Once he left for college, her life worsened and she had no one to turn to. Her mother’s coldness toward her only amplified her worst fear that she was hopelessly flawed.

FQ: Interesting twist at the end of the story. Without giving a spoiler, when did you know this was the course you would take and how did the realization come to you?

DE SMET: The twist at the end was not in the original draft. It happened suddenly, and was a breakthrough moment for me. It all made sense. The story has three twists; it was important to integrate them carefully so they made sense without giving the event away. It was gut wrenching!

FQ: I am intrigued by your writing background. How did you migrate to writing fiction from editorials and PR for dignitaries? How have your former colleagues reacted to Pages in the Wind?


DE SMET: I've always loved to write but lacked the confidence to push it forward. One day I woke up and thought, "There will never be a right time." So, I devoted every morning before work to my own writing. One hour eventually grew to three and so on. The last year, I wrote six hours a day before going to work. I don't know how I worked so many hours, but Pages in the Wind had become my life and passion.

I asked a former boss to read it, and he was thrilled. This man is a genius scientist and has authored several books, so his testimonial meant the world to me.

FQ: What advice would you give to a first time author who knows nothing about the publishing process?

DE SMET: It depends where they are in the process. If they are starting out, I would say write, write, and keep writing. Get beta readers you know will tell you the truth. Read your work out loud or get an audio app that will read it to you (amazing what you catch). Try to get an agent but if you become discouraged, self-publishing is fantastic. Make sure you have it well edited and proofed.

FQ: I see you have lived in several states. Of the many landscapes, what is the one place you would truly call home (and why)?

DE SMET: Wow, I think I've moved around too much and didn't live in a home or city long enough to feel connected enough to call one place "home." I was very attached to my mother and grandparents so would probably say San Diego and Pasadena. I'm probably attached to where I felt most loved.

FQ: You have a love for the ‘classics.’ What is your favorite and did it provide foundation for your own personal love of writing? I ask this latter part of the question because you have a very strong connection with your pen. 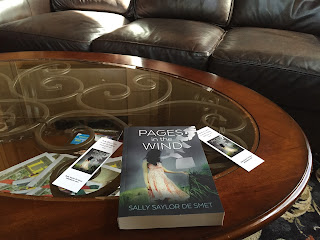 DE SMET: I have a first edition of The Harvard Classics, passed down from my Belgian grandma. I am reading the fifty one-volume collection, which would take a lifetime to devour so I pick and choose. I love the imagery of the words and the depth of feeling. The lyrical words hit my ear in a pleasing way. Poetry is a favorite and the Greek Dramas. Of course, there are many fabulous works not covered in the Harvard Classics, in particular works by women as well as literature dated from the last hundred years; but those works can be found elsewhere. Right now, I'm reading Count Alessandro Manzoni, an Italian poet and novelist, and his work I Promessi Sposi (The Betrothed) circa 1825.

FQ: When you are mapping out a story, do you outline and follow a specific process (or do you simply sit before your computer and let the words flow)?

DE SMET: I do a brief outline but let the story unfold. Pages in the Wind would have suffered if I had stuck to an outline. It was the kind of book that had a life of its own and I had to follow my heart with these characters. At times, it was as though the characters were talking to me—asking for more or guiding me in a different direction. I wrote the first draft with my heart in a free association style, and got my brain involved in later drafts. I didn’t tie myself down with an outline; the emotions could not have squeezed into an outline—they needed the freedom to flow.

To learn more about Pages in the Wind please read the review at: Feathered Quill Book Reviews.

Posted by FeatheredQuillBookReviews at 9:29 PM