FQ: 1 - You obviously love the ocean and all the creatures that live within its waters. Would you tell us a little about your background? Did you study oceanography or is it simply a love of the ocean that inspired you?

I’ve always had a fascination with the ocean even though I live in the middle of the United States. Living so far from the ocean only intensifies my desire to be near it. When I do visit the seaside, it’s a magical experience for me. I wanted to translate that magical experience into a picture book for young readers.


FQ: Why did you choose to pair a sea horse with coral, instead of say, a clown fish and an eel? It's a very unique pairing.


It is a very special pairing. In real life many species of sea horses are entirely dependent on their coral environment for protection. The corals provide the perfect hiding place from predators. Since corals often protect sea horses, I thought it would be a nice reversal to have my hero, Sea Horse, protecting his best friend, Coral. Also, many species of coral and even some coral reefs are endangered around the world, so it was easy to imagine Coral needed to be protected…but from what? That was the hard part. I knew the danger needed to be concrete for young readers, so I chose a sea dragon because the word ‘dragon’ definitely excites the imagination!


FQ: There's a lot of background information on sea horses in your book. Are they your favorite sea creature?


Sea horses and the leafy sea dragons are definitely among my favorite sea creatures. Sea horses are very unique animals because the male actually carries the eggs in a pouch and gives birth. I considered writing a story about that, but I knew I’d never be able to top Eric Carle’s Mister Seahorse. 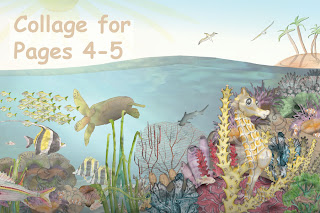 FQ: You write about the Australian coral reef. Have you ever been there? If so, would you tell us a little about your experience?


I would LOVE to visit Australia! That is my dream vacation. I haven’t been there yet, and since I couldn’t see the animals in their native Australian environment, I did the next best thing. I visited several aquariums around the United States where I took lots of notes, photos, and videos of the sea horses and sea dragons. My favorite aquarium to visit was the Dallas World Aquarium. I think they probably have one of the best leafy sea dragon exhibits in the country. Leafy sea dragons are actually native to temperate reefs rather than coral reefs, but for the purpose of my story, I crowded a few temperate reef animals onto my coral reef.


FQ: Would you tell us a little about the creative process behind your drawings? They're very detailed and convey so much. 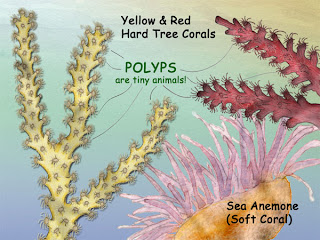 I always do research for my stories, but the art requires the most research by far. My research always begins in the library, but for Sea Horse, Run! I also visited seven different aquariums. Each individual animal or background is drawn on a separate piece of paper, but the final art is a collage. For example, the first two pages of the story (pages 4-5) is one collage, but it has more than one hundred pieces or layers! After I sketch out an image, I paint with a dry-brush watercolor technique or I use colored pencils to bring a character to life. Each image is then scanned into the computer where I cut and paste the collage. I usually add a few computer special effects (shadows, reflections, etc.) so the final piece will blend seamlessly together.


FQ: I love the eyes you draw into each character's face; they say so much. Is there a lot of thought that goes into each pair of expressive eyes? What do you want them to say?


The eyes are the soul of my characters. I put a lot of time and thought into each pair of eyes; however, Coral is an important character in the story, and she does NOT have eyes. I knew that would make it more challenging for readers to connect with her character, but since my husband is legally blind, I decided her character would give me the opportunity to express that you don’t need eyes in order to ‘see’ and understand the world around you. One of the most profound moments in the story is when Coral sings, “I see, I see!” She understands the ‘seaweed’ is the sea dragon long before Sea Horse, even though he has eyes to see.


FQ: Sea Horse, Run! is both fun and educational. What would you like young readers to come away with after reading your story? 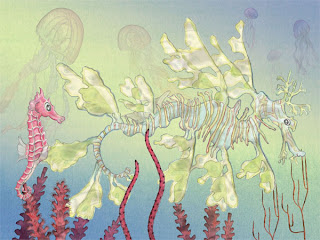 Fear is a powerful emotion that can quickly grow out of control. When someone is different from us, we fear them, and that fear drives us further apart. I hope my story will teach young readers to be more accepting of differences. When you see someone for who they really are, your view of yourself and the world will expand and grow.


How do you teach someone that is blind to understand a visual place like the coral reef? Well, I think if a coral reef could be heard rather than viewed, it would sound like a symphony accompanied by a chorus. Of course, the choral part would be sung by the coral! In my story, Coral’s character is actually a chorus of coral polyps. She sings and her collective song serves the same function as a Greek chorus in ancient theater. Coral expresses Sea Horse’s fears through her song, “Sea Horse, run!”