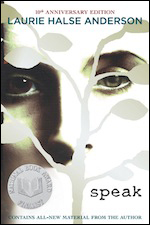 Reprinted with permission of Publishers Weekly.

Responding to an attack by an associate professor in Missouri who called Speak "soft pornography," the Penguin Young Readers Group took out a full page ad in today’s New York Times to defend the novel by Laurie Halse Anderson. In an op-ed piece earlier this month in the Missouri News-Leader, Wesley Scroggins, associate professor of management at Missouri State University, wrote that Speak was not appropriate for students of the Republic School District and also challenged Slaughterhouse-Five and Twenty Boy Summer. “That such a decorated book could be challenged is disturbing,” said Penguin’s Shanta Newlin about the decision to run an ad. With Banned Books Week now in full swing (Sept. 25-Oct. 2), Penguin believes the ad points to the larger issue of books still being challenged in large numbers across the country, Newlin added. The ad, in fact, notes that "every day in this country, people are being told what they can and can't read," and it asks Times readers to "read the book. Decide for yourself."

First released in 1999, Speak was a National Book Award finalist, and is a staple backlist title for Penguin. Scroggins’s op-ed touched off a heated debate in the bookselling and library communities, and Anderson’s response and blog posts have received thousands of hits.

An editor's note at the end of Scroggins’s original piece from the Republic School District superintendent Vern Minor stated that Slaughterhouse-Five had already been removed and Twenty Boy Summer was under review, and while Scroggins is working to get Speak removed from classrooms there was no word if he has been successful.
Posted by FeatheredQuillBookReviews at 10:56 AM