#BookReview of The Renunciation by Alex McGlothin 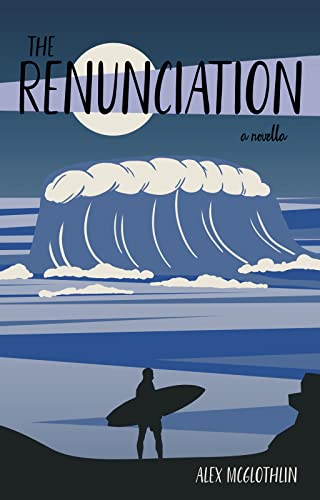 The Renunciation, the fifth novel in Alex McGlothin's collection, oozes the authenticity of modern existence via two men from different milieus stuck between materialistic commitments and the happiness of riches within.

A massive opportunity knocks at the door for Michael Winston, a love-struck and professionally despondent journalist from New York. He must submit a breakthrough story to win the position of editor-in-chief at his firm. He will be competing for that position against the boorish celebrity journalist Sam. Will Michael be able to find a perfect story to help him win the editor position? As he gains a leg up, Michael stumbles across an opportunity to write about the two-time surfing champion Louis Giroux - now regarded as an enigmatic and reclusive figure. Michael is sure to strike gold when he writes a story that would reward him and bring him success and happiness - a story full of success and suspense.

Alas, this spark of the promise of success flushes away as Michael's first day in Costa Rica begins with his camera smashed. What's more, Michael's journalist's freedom is knocked-around: he is compelled to utilize Louis' cameraman and is not authorized to inquire about Louis' personal life, surfing business, or championships. As days pass and Michael's desperate hope of defeating Sam fades, he discovers another prisoner – World Surfing champion Louis Giroux - who, while not forbidden from press freedom, is debarred from living life as he pleases. Amid the Costa Rican sunset, as he goes strolling, watching the specimens of great surfing, and dallying in Pura Vida cafes in Tamarindo, Michael ultimately hits upon a life-changing realization: the value of renunciation.

McGlothin sprinkles exquisite metaphors throughout the plot, established against the outback of Costa Rica. The novel emphasizes the conflict between internal and external validation, which has gotten hold of the current culture. Michael is overcome by his belief in the need for professional success vs. the nourishment of his heart's wants. He is obsessed with achievement to the point of not understanding why someone like Louis would quit at the peak of success. Michael's journey becomes a modern allegory in which success is relative and happiness is absolute. Michael is struck by the relativity of success and its impermanence as it correlates first with his relationship with his love interest and then with landing a big far-reaching story - all washing away with time. The canvas of The Renunciation begins in a New York office and locomotes down along beaches and cafes, radiating the essence of renunciation - of letting go of ephemeral validations in exchange for satisfaction in life.

Quill says: The Renunciation takes the reader on an adventure rove from the fast-paced city of New York to the gay surfing beaches of Costa Rica - a journey from materialistic aspirations to the renunciation of concrete validations.

For more information on The Renunciation, please visit the author's website at: www.alexmcglothlin.com

Posted by FeatheredQuillBookReviews at 1:08 PM