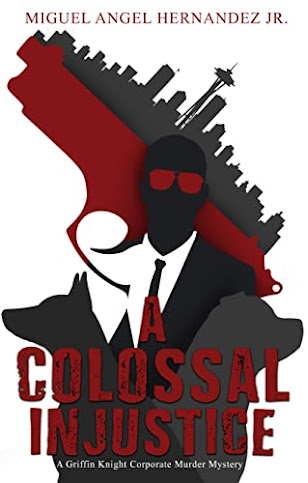 An immensely satisfying brew of drama, treachery, and violence evoking classic crime tropes from an author with total command of this genre await readers in A Colossal Injustice.

A Colossal Injustice is the second volume in the Griffin Knight Murder Mystery Series by Miguel Angel Hernandez Jr. The plot begins with Detective Griffin Knight making his way into Seattle where he plans to help Kalyx, the mysterious hacker who assisted him in resolving the Alix Kroft case in Book One of the Griffin Knight series. He hasn't visited Seattle since the demise of his first partner, Trenton Barnes. However, a major challenge faces him- Jurisdiction. He simply has no official authority to make legal decisions or judgments beyond the borders of his hometown, New York. This is not settling well with him.

The death of Kalyx's fiancée, Dylan Walker, the COO and CFO of Colossus, a technological and weaponry development company, came as a shock to both Kalyx and Felix (one of Dylan's close friends). Dylan had involved them in investigating a massive money cover-up at Colossus, a plot so deeply and professionally hidden from the normal eye. His tech expertise caught a series of highly encrypted transactions and entries through servers that were not known to him despite being a senior member of the company. Dylan couldn't help but wonder whether there existed another more skilled individual who had access to the system other than him and his boss Sapphire. With the help of the experienced Detective Griffin, Felix, and his sister from the Seattle Police Department, Kalyx hopes to find out the truth and get much-needed closure on the case.

Once again Miguel Hernandez sends readers on an action-packed ride that is richly embedded with suspense and drama. The denouement has the perfect thriller-mystery quality where clues stare you in the face throughout the read, but then slap your head at the end leaving you wondering how you missed them. Readers can identify with the lead character Detective Griffin, owing to his outstanding performance as a solid, enthusiastic, and courageous investigator from Do Nothing, Griffin Knight's First Murder Mystery.

Hernandez has created well-hewn secondary characters whose demeanor, dialogue, and skills add depth to the script. The adrenaline-rushing, fast-paced action and twists keep readers turning the pages in anticipation and amusement. Every chapter feels so real, as if one has been dropped down in the middle of the action, and can hear, taste, touch, and smell everything happening around them. Lovers of the mystery/thriller genre will love the creepy atmosphere at Colossus, and the genius investigation to capture the antagonist. Miguel Angel Hernandez Jr., a seasoned author whose record in mystery/thriller work shows his creativity, passion, and talent, has created a story so magical that one would want to go back and experience the thrill all over again.

Quill says: The best mysteries and thrillers aren’t books that you can simply put aside when you’re done. They should linger in your heart, and A Colossal Injustice by Miguel Angel Hernandez Jr. undoubtedly fits meets that criterion!

Posted by FeatheredQuillBookReviews at 3:55 PM