#BookReview - Dragon's Eye: Who's Watching You? 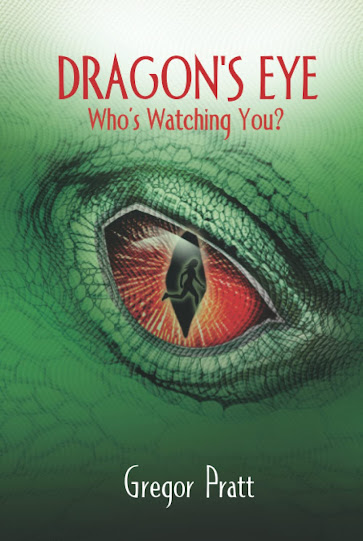 Dragon's Eye: Who's Watching You? (The Jack and Maddy Gamble Series, Book 2)
By: Gregor Pratt
Publisher: St. Armands Press
Publication Date: October 26, 2022
ISBN: 979-8986919300
Reviewed by: Diane Lunsford
Review Date: December 5, 2022
Dragon’s Eye is Gregor Pratt’s second book in his Jack and Maddy Gamble Series. Intrigue and mystery are abundant across the pages of this captivating thriller.
Maddy Gamble is married to Jack Gamble. According to Jack, this was more than coincidence. "...My trial lawyer swagger is gone, as are my skirt-chasing days. When I found Maddy, I found myself, the good parts of me, and I overcame my distrust of women. Maddy came to Ebola Island to help with my rescue and had helped me wind up what was probably the most significant lawsuit ever..." Maddy and Jack aren’t your typical homebodies. Rather, after solving a major case tied to the Ebola Island matter, they married in Malagasy and having done a fair amount of research, they decided to settle in Nelson, New Zealand. The joy of Maddy being pregnant with JJ (Jack Junior) and less than a year later, the birth of their daughter Allison, meant they were well on their way to their happily-ever-after fairytale. JJ and Allison are both enrolled in Auckland Point School, and in the same class since Allison turned five shortly before JJ was six. So how does Julia Adamson fit into this scenario?
Julia Adamson is having an affair. While relaxing on the balcony of her second-floor room at the Palazzo Motor Lodge, her mind wanders as she justifies her clandestine trysts with a married man. Now that he’s discretely left to return to his real life, Julia sips her wine and thinks about how the affair has complicated her life. It’s not that she had great disdain for her husband. Rather, she had nothing for him—they didn’t fight; they simply ignored each other. Something snaps Julia out of her reverie. She sees a woman crossing the courtyard by the pool below and what captures Julia’s attention is the pair of Manolo Blahnik pumps the woman is sporting. What’s a gal like that doing in a place like this? Time for Julia to leave until she notices the six figures all dressed in black from head-to-toe en route to the same room where the woman with the fabulous shoes had gone moments before. Is Julia in the wrong place at the wrong time and witnessing something she probably shouldn’t be witnessing? This is just the beginning of a tangled web of murder and mystery, and how does China plays into the entire nightmare about to unfold?
Not having read Ebola Island, the first book in Mr. Pratt’s Jack and Maddy Gamble Series, the action and adventure that plays out across the pages of Dragon’s Eye is inspiration enough to go back and do just that. The breadcrumbs Mr. Pratt places along the path in the opening pages of this read are excellent. On Page 1, he is enticing his audience with character Julia Adamson and plants the seed of how she will be relevant...later on...keep reading, he’s just getting started. Even though this is a work of fiction, even the title, "Dragon’s Eye," connects to relevance in our modern society in terms of - are we being watched? Mr. Pratt builds layer upon layer of intensity as the façade of normal, every-day life for characters Maddy and Jack Gamble is just that, a façade. He cites sublime nuances toward what was once and is no more: "...There were still internal combustion vehicles around, but they seemed fewer and fewer except for the collector vehicles..." He also does a superb job of showing the surveillance concept around China being at the center of its existence: "...The Chinese surveillance camera had been widely used against the Uighurs in China, a subculture that had been all but wiped out after first being monitored virtually everywhere..." There is a lot to unpack in this fast-paced, compelling read and it’s worth every page to do so. Well done Mr. Pratt.
Quill says: Dragon’s Eye takes the concept of ‘Who’s Watching You’ to the next level and then some!
For more information on Dragon's Eye: Who's Watching You? (The Jack and Maddy Gamble Series, Book 2), please visit the author's website at: www.gregorprass.com
Posted by FeatheredQuillBookReviews at 11:25 AM