#BookReview of Don't Look Back: A Mack & M Mystery by Stephen Winn 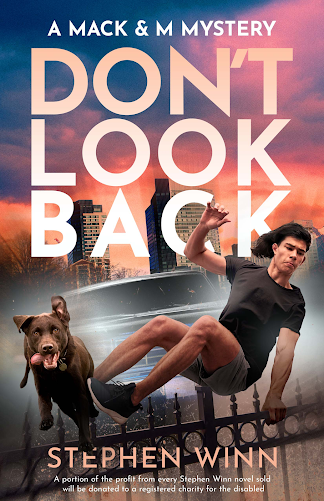 Mackenzie (Mack) Sampson is a relatively successful private investigator. A few years back, he was an even greater detective with Boston Homicide. Detective Nik Lewis, Mack’s boss, used to think as much at one time. That was until Mack screwed up royally by not only showing up drunk to a crime scene but compromising the evidence as well. There were no more ‘get out of jail free’ cards for Mack and Detective Lewis told him that when he fired him on the spot that fateful day.

Fast-forward a few years later and Mack is doing ‘okay’ but the reality is if he doesn’t pull in new business soon, it won’t be long before the doors to his business close permanently. Mack reminisces back to that time when the love of his life Jamie was still alive and how he got to where he is now. Back then, his feet were planted firmly on the ground and he and Janie were destined to live happily ever after until a devastating car accident took Jamie away from him. That’s when alcohol and prescription drugs set up permanent residency in Mack’s life that eventually ruined his professional life as a detective with Boston Homicide. A few years later, he opens his private investigation firm. However, business has been less than great and Mack is worried about yet another devastating closure in his book of life.

Hope shines bright when one least expects it and such is the case for Mack. It seems a body is found in the trunk of an abandoned vehicle outside one of the local watering holes. The car, however, isn’t your typical ‘beater.’ Rather it is a Bently and it just so happens to belong to Bill Stewart, esteemed partner of John Whiting in the successful Royal Ransom import business. John smells a rate and doesn’t trust the local law enforcement to get to the bottom of what really happened to his partner. It’s a win-win situation for both John Whiting and Mack the day he walks through the doors of Mack’s business. For Whiting, the prospect of getting to the truth and for Mack, the offer of $100,000 to keep his business doors open to see another day. What Mack doesn’t know is this God-sent pay day is going to lead him down some very interesting paths before he can stamp the file ‘case closed.’

Stephen Winn knows how to spin a captivating murder mystery. His old school style writing has the allure of ‘gum shoe’ detective nuance sprinkled throughout. Main character Mackenzie Sampson is a guy’s guy and there is an affectionate twist throughout the way Mr. Winn shares the spotlight when showcasing the relationship between Mack and his beloved dog ‘Woof.’ While Winn doesn’t come right out and paint character Mack as a full-blown alcoholic, there are subtleties throughout the read toward Mack’s struggle with alcohol and prescription drugs and his personal reasoning of why it’s okay for him to do so: "...Alcohol hadn’t eased the repetitive anxiety attacks, so he also began popping Xanax like candy. His two growing addictions ended up ruining his professional life—a stellar career with Boston Homicide..." Winn has blended a diverse cast of characters among Mack’s firm with Paula (‘Paul’), M and himself who are likened to a group of misfits who are conversely quite good at their respective contributions. Paula is the office administrator and it’s clear she is the glue. M is the martial arts ‘enforcer’ who keeps things safe in his stealth way and Mack is the charisma who can land the business. The pace is at a great clip from start to finish and the dialogue is credible. Simply put, Mr. Winn has crafted an engaging read and I can only hope he is working on the next in this detective series.

Quill says: Just when you think you’ve got it all figured out, Don’t Look Back will throw you a curve ball when you least expected it!

For more information on Don’t Look Back, a Mack & M Mystery, please visit the author's website at: www.stephenwinn.com.

Posted by FeatheredQuillBookReviews at 2:43 PM