#BookReview - The You I See bye Danny Freeman 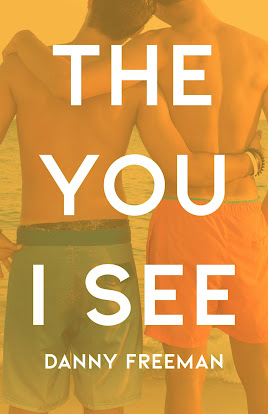 The You I See

When Alex first walked into the church kitchen and started working at the sandwich assembly line, little did he know that Brandon, the extremely cute and chatty boy standing across from him, was equally dazzled and smitten by him as well. Thus begins a story of two adolescent boys who, despite their obvious differences in personality (one is smaller, quieter and more studious, the other bigger and often brash) and their radically dissimilar upbringing (one grew up in an open, loving family, the other in a religious and rigid environment), quickly become inseparable, great friends.

While spending every moment together as they possibly can between their own family and school commitments, Alex starts having more serious, romantic feelings for Brandon, but is afraid to say anything. Fortunately for them both, however, Brandon musters up his own courage, and makes the first move. With the assistance of Alex’s supportive parents, their relationship and romance continues to slowly grow and blossom throughout the story as they face and overcome several obstacles that threaten to derail their relationship including bullying, and issues with Brandon’s abusive father.

Author Danny Freeman writes an honest, yet sensitive, character-driven, and uplifting story of two gay teenagers growing up, and beginning to identify and express their own sexual identities. While most of this book is engaging, some of the text is a bit wordy or awkward at times, and could be edited for brevity. In particular, the dialogue is often lengthy and filled with the bickerings between the two main characters which may cause readers to become distracted or disinterested. Of course teenagers, particularly boys, wrestle and often bicker with each other, but having a bit less of this would bring more attention to the critically important issues in the story, thus making it a more enjoyable read. While The You I See may not be the "typical" teenage heterosexual romantic story that has been portrayed hundreds of times over the centuries in literature, it is a positive and uplifting story that definitely needs to be told. The story is lighthearted, and encouraging, and readers will easily find themselves rooting for the success of Brandon and Alex’s relationship. This book is also great at pointing out how far our society has come as far as acceptance and equality of people who are LGBTQ+ since the late 1980s and early '90s. But there is of course more work that needs to be done in our society, and another reason why Brandon and Alex's love story needs to be available for everyone to read. The reality is, as author Wally Lamb once said, "Love comes in far more shapes and sizes than what the family-values crowd condones…" Perhaps if the world was exposed to more stories such as this one, it would become more familiar, and there would be less rejection and hatred.

Quill says: Author Danny Freeman presents a timely and engaging novel about young love with its ups and downs through the lives of two gay male teens in his debut novel The You I See.

For more information on The You I See, please visit the author's website at: dfreemanbooks.com/

Posted by FeatheredQuillBookReviews at 12:43 PM