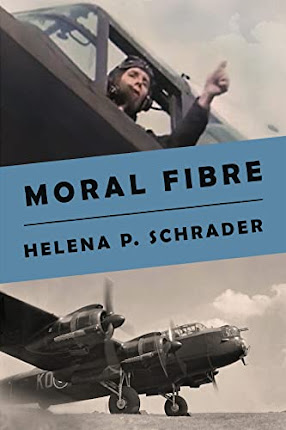 For those readers who have not yet gone on the “ride of your life” with this incredible author, I suggest you jump on the plane as fast as possible. Why is that? Because Ms. Schrader has written yet another historical fiction story that focuses on some of the coolest, most courageous people who fought for freedom.

This time around, we are headed for Hitler’s horrific Reich with Flying Officer Christopher “Kit” Moran. Picking up where the last tale of Moran left off (Lack of Moral Fibre), Kit has now earned his pilot’s wings. However, in the earlier book, Kit had been sent away from his squadron when he refused to fly in a raid. The title was intriguing; readers learned that Lack of Moral Fibre (AKA: LMF) was actually introduced into the Royal Air Force (RAF) in 1940, and was a stamp put on aircrew who refused to fly without having an actual medical reason. This was not what you would call a reason to be locked up, since the RAF had spent so much time and money that they needed one and all to fly against the Nazi regime. Kit Moran had refused because his best friend and skipper, Don, had actually lost his life in the raid. Not to mention, Kit’s heart now belongs to Don’s fiancée Georgina who, because of her suffering, is not ready to even entertain the idea of a romantic relationship this soon. As time moves forward, though, Kit is up against a tough moment in his life: after being seen as having LMF, he must now return to his squadron and try flying once more, leaving the stigma behind.

Meeting up with Kit in August of 1944, we sit with him on the train as it pulls out of the station in Liverpool and takes him halfway across the country to a location he’s never been to before. After spending the last six months in South Africa, this former flight engineer is now wearing the distinctive shirt that shows off his newly earned silver wings and the armband of his new profession: Flying Officer. He’s supposed to be enjoying these seven days he has left before he has to report back to training. What he’s doing, however, is heading to Yorkshire in order to visit Georgina’s hometown and stay with her parents. You see, Georgina ended up writing to Kit while he was in South Africa a number of times – usually speaking about how hard it was for her and how much her heart hurt because of losing Don. Over time, however, the letters had become more about the two of them than Don’s sudden tragic death. And now, here Kit is, headed to stay with her parents for the week and not quite sure what to make of the situation. The letter inviting him had been impersonal, to say the least, so what awaits him in the tiny town of Foster Clough is a mystery.

The author does an incredible job of writing this work of fiction by telling it from actual written and verbal accounts from very real aircrew who served heroically with the RAF Bomber Command during WWII. Kit’s struggles, his life, and the romance he is continuously hoping and striving to have with the woman he loves hits you directly in the soul, but the addition of adventure and excitement makes you want to read cover-to-cover without ever having to put the book down. After all, the RAF’s bombing offensive against Nazi Germany was one of the longest, most expensive and controversial of the Allied campaigns during the Second World War, and the contributions made by these men – and the women they had to leave behind – were more than substantial. And Ms. Schrader does a brilliant job of heralding them with every chapter.

Knowing the pain and what occurred with Kit in the previous novella makes this book even more emotional. But readers can enjoy this book as a standalone, because the Prologue sets the stage by showing you where and how the first book left off before beginning Kit’s progress back into the sky with this new novel.

From meeting and getting to know her father, the Vicar, to Kit’s adventures returning to operational training and finally taking to the sky in order to destroy the worst enemy anyone has ever seen, Kit’s progress through this ‘next phase’ of his life is absolutely incredible! The intriguing dialogue, the settings, the clear descriptions of such harsh situations – this author has hit on all cylinders once again, and even provides the most exhilarating history lesson I, personally, have ever had the pleasure of reading. “5-Stars!”

Quill says: Helena Schrader’s in-depth stories, fantastic characters, and ability to write an unforgettable tale makes her one of the best authors out there!

Posted by FeatheredQuillBookReviews at 1:06 PM