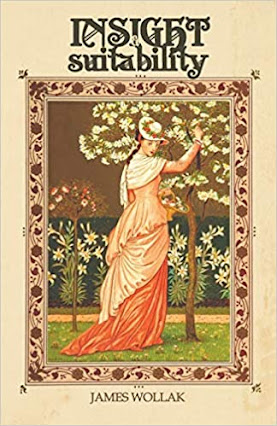 In this notable debut novel, author James Wollak has created a sequel to Jane Austen’s classic Pride and Prejudice, following some of its characters through the pangs and possibilities of courtship and marriage.

Taking place some months after the ending of Austen’s novel, Wollak’s view encompasses the personal longings and frustrations of young women in the early 1800s faced with the prospect of choosing the best lifestyle, which must of necessity center on choosing the most suitable husband. But to find that partner, avoiding impulse and studying the problem from all angles, women from the highest born to the lowliest will need special insight.

Although there are many interwoven storylines in Wollak’s complex panorama, he focuses special attention on a few, including those of Anne de Bourgh and Kitty and Mary Bennet. The book opens when Anne pays a surprise visit to Elizabeth Darcy to privately ask her opinion about two men by whom Anne is being courted. Tarquinius Duvall is handsome and easy to talk to, yet at times, shows a mysterious, somehow disturbing aspect. Edgar Rutledge is harder to engage in conversation, but reveals a high-minded kindness that attracts Anne deeply. Kitty is drawn to Marius, Tarquin’s brother, but put off, indeed, angered by the ingrained snobbery of the young man’s mother, Lady Julia, aimed not only at Kitty but at her shy but studious sister Mary. Once both Kitty and Anne have settled on and been lovingly accepted by their future spouses, Mary’s fate is still undetermined. But with secret machinations from allies behind the scenes, she hopes to meet a man who has an admiration for her talents and intellect.

Wollak professes a lifelong fascination with the works of Jane Austen, a prolific author who, for her times, was determined, like so many of her heroines, to step outside the rigid lines drawn by society in order to express her attitudes and aptitudes. It is this quality that Wollak has seized on, showing, for example, Kitty’s resolve in speaking harshly, almost threateningly, to a man who is abusing her sister’s trust. Wollak gives the men a say also, showing them as for the most part honorable, and also bound by social restraints though not so tightly as the women. The author is to be commended for keeping both the dialogue and narrative in Austen’s style, offering a new generation of her fans a wider look at her world. Composing his view of that world, with its large cast of characters and many intricate details of lifestyle and custom, must surely have been a prodigious task.

Quill says: Wollak’s novel will no doubt garner a fan base of those who, like him, find significance in the dynamic interactions of our forebears – men and women who could both accept the class, culture and mores they were heir to, and whenever possible, strive for better.

For more information on Insight and Suitability, please visit the author's website at: jameswollak.com

Posted by FeatheredQuillBookReviews at 12:08 PM