#BookReview - Crisanta Knight: Into the Gray 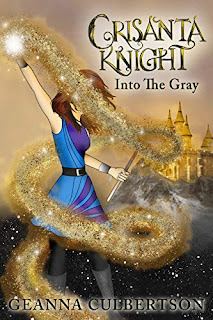 You all heard my shouts of glee and praise when I first entered this world...I was beyond happy to meet Crisanta Knight, daughter of Cinderella, living in her homeland of (correctly named, by the way) Book. Not only did she pull me in, but I smiled wide when I met up with the wonderful citizens of Book—who you’ll know immediately, as they are characters you’ve grown to love since the day you began reading, as well as some others who make up the popular casts of the most famous fairytales ever written. I jumped on board and soared with Crisanta and her friends long ago as she read, followed, fought, and discovered things about herself and her future that were written in her very own “protagonist book” which actually details her fate.

Crisanta took it upon herself to stand up and fight against the hideous prophecies that had been written about her, saying evil creatures would come together in order to overthrow the realm of Book and eliminate one and all. Now, of course, I learned that these beings found out about the prophecy and knew they had to take Crisanta out of the game for good in order to have their own plot of destruction succeed. So I, along with a ton of other very smart readers who love to have that perfect series enter their lives, went on every adventure thus far with Ms. Knight and her friends. And I have enjoyed every single second in their presence!

I partied it up in Neverland, went on a journey to locate Excalibur, and even met a young man—the actual grandson of King Midas—who’s working diligently to win Crisanta’s heart. I have now had the pleasure to soar once again through Book #7 of this series and, I must say, I am more in love with this author and these books than ever before...if that’s even possible.

This time around we are getting ‘down to brass tacks’ as my grandmother called it. We are looking at a true hero who, this time, has to battle with her own conscience. The clock progresses on all of us; even Crisanta. She has had ups, such as becoming a star athlete at her protagonist school and has become closer to her network of friends. She’s also had more than a few downs; such as, she’s looking ahead to a trial that will be held soon where the leaders of the realm – as well as the high-up Fairy Godmothers – will bring down their form of justice on Crisanta’s head. They know now, as we all do, about Crisanta’s gift of “Pure Magic” and the plot of the villains that their realm could perhaps avoid if Crisanta no longer was a part of Book. There are things that could help everyone see the light and how much Crisanta could help them all, but let us just say that information is locked away in a princess’s brain with no way of getting the girl to speak because she’s been silenced by a sleeping curse.

The commons rebellion is strengthening their resolve each and every day. Crisanta is now living with the fact that she has taken a life because of an evil queen’s plan that made the young girl snap. Although it was a ‘bad guy’ she brought down, the moral struggle she now faces is a difficult one. Crisanta must learn to get her powers under control before, perhaps, she does follow the wrong road and become a member of the darker side of the world.

Readers still receive the fantastical locations, characters, and an action-packed story from this incredible author; however, Book 7 also delivers a deeper, more emotional tale. Much like Star Wars fans rave about the more revealing Empire Strikes Back, and how Potter fans speak about The Half-Blood Prince, this is the book in Crisanta’s series that explores the harsher side of things and focuses on the maturing of a character who finally sees and feels all that their strength can do, yet is now highly worried about how to get it under control.

The fight for her friends and her home of Book has now been joined with the fight she is having with her own conscience. The previous books have perfectly led up to this “gray area” that Crisanta now finds herself immersed in; and it is here, in this haze, where she will make the choice to solidify herself as a hero, or turn toward the darkness and allow her long-time enemies to win the war, after all.

Quill says: This series now walks into a place where the best or worst choices will be made, and continues to shine: 5 Stars!

Posted by FeatheredQuillBookReviews at 5:17 PM