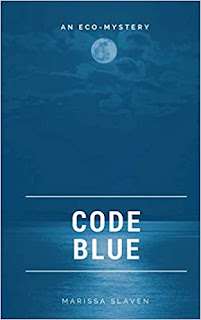 Author Marissa Slaven’s debut young adult novel Code Blue tells the story of a mysterious eco-thriller. The protagonist, Tic Brewer, is a teenage girl who lives with her mother. Her “Uncle” Al, who is actually her neighbor, plays the role of her father figure, as Tic lost her own dad in a boating accident before she was born. Tic is intrigued by science and spends every spare minute she has studying the subject.

Our story begins as Uncle Al takes Tic to take the entrance exam for North East Science Academy (NESA), a prestigious science-centered school. Tic’s dream is to follow in her father’s footsteps and become a scientist. She wants to make a difference in the world, which has suffered extreme climate change, resulting in certain previously livable areas becoming uninhabitable.

Tic is ecstatic when she receives the news from NESA that she has been accepted, and she embraces student life at the school wholeheartedly. She develops relationships with Lee, the mysterious and handsome boy who she meets at the entrance exam; Phish, the smart and spunky girl who gives her a ride to NESA; and Tate, the fourth-year student who becomes her mentor and eventually, an unlikely friend. With the help of her new companions, she uncovers mysteries surrounding her father’s death and how it relates to a current climate phenomenon, the melting of the glaciers.

Slaven’s fictional story of climate change keeps the reader guessing until the end. With so many twists and turns that the reader does not see coming, Code Blue is the epitome of a page-turner. As a teenage girl, the protagonist Tic will appeal to young adult readers. Tic undergoes typical teenage situations, all while experiencing love and loss that force her to grow up faster than any child should be compelled to.

It is worth mentioning that this novel would be best suited for young adult readers over the age of 15 due to certain sensitive topics including: death, violence, and sex. Slaven’s main character, Tic, manages all of these subjects throughout the story. None of these issues are presented in a graphic or distasteful way, but they do occur. The situations in which these topics appear are pertinent to the story and serve a purpose, which is refreshing, considering that many young adult novels often throw these issues into a story simply to obtain shock value.

Quill says: Code Blue is a fascinating ecological brainteaser that will urge readers to consider the effects of their actions on our environment. Numerous cliffhangers throughout the story help shape this book into an environmental thriller that will interest and engage young and old readers alike from start to finish.

To learn more about Code Blue, please visit the author’s website at: marissaslaven.com.

Posted by FeatheredQuillBookReviews at 11:47 AM