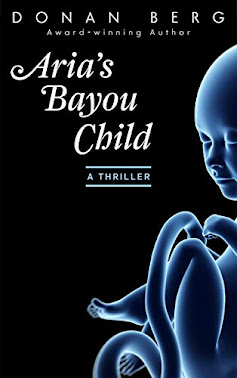 FQ: I see that Aria’s Bayou Child was “based on actual events.” Are you a historical researcher who loves going back to the past and finding something that spurs the imagination, or do most of your ideas come to you from out of the blue and you just become obsessed with a particular subject and feel like you must create a new title?

BERG: Neither. I’m intrigued by everyday people who battle human challenges in truly heroic ways. I believe all humans have an innate power to perform acts the individual never had an inkling they were capable of. There’s an early foreshadowing for Aria’s life that I’ve been told is subtle, but I disagree. Reference to Aria’s early adult years includes refugee mission work in Africa. One needs but a snippet of international news to understand the compassion and dedication required of aid workers amid brutal hardship. It has blessed me to inhale life in an era when inspiring individuals do not hide in caves.

FQ: Being from Ireland, can you speak a bit about your own backstory? What first brought you to the States? In addition, were you always writing from a young age, or did that journey begin later in life?

BERG: I’ve often explained I was a result of the war. WWII, that is. My father was a US Army sergeant stationed initially in Ireland where he met and married my mother. I cherish a $2 bill my father carried in his billfold, where in the outside margin, he wrote the names of the towns he “visited” across Europe. After V - E Day, my mother and I joined him in Minnesota. While in high school, my mother wrote as a local correspondent for three newspapers. I often accompanied her as a photographer. I tell book clubs my novel writing career started upon graduation from the University of Minnesota with a BA in journalism. That is because every journalism student stares at the stars and dreams of writing the “great American novel.” I also relate it took me thirty years to finish the novel as Uncle Sam, marriage, kids, and earning a living intervened.

FQ: I was told that you gave up aeronautical engineering for journalism; what made you take that step?

BERG: Space orbital flight and flying beckoned a high school student who had suffered trans-Atlantic seasickness on the Queen Elizabeth. Daydreaming wasn’t all consuming, as I worked on a weekly newspaper setting type and performing commercial printing duties. While in my spring quarter as a School of Engineering freshman, I learned I was one of 300 calculus students. A fall quarter knowledge tidbit pierced my brain. Fellow calculus students the prior fall had totaled 1,000. A second milestone had occurred three months prior. I earned a national 4-H award in photography, one of the first eight 4-Hers so honored. That same spring a crack US Air Force medical team arrived to give physicals to the ROTC class I was enrolled in. I had no Top Gun vision; my eyesight required glasses. I swear that with my eyeglasses off, the examiner asked me to look at the chart on the wall and I replied, “What wall?” His gracious exam capsulation was that I’d do great in the United States Army. Upon completion of my freshman year, I walked across the street from the School of Engineering to the School of Journalism. I did not leave calculus behind. To graduate with a journalism degree required a broad liberal arts study. In an economics class, I’d missed one class all quarter and the day’s topic was on the final exam. I read the question, marshalled the facts, and used calculus to plot the supply and demand lines. No common line point existed. The lines were parallel. With this conclusion I argued my economics point. The A received never so gratifying. What I later exaggerated as equivalent to a trial by fire became an early lesson to never dismiss any part of, or experience in life, for each day brings value.

FQ: You’ve dipped your hand in many genres, and I was wondering if there happens to be one you have not dived into as of yet that you would like to try? If so, what would that be and why?

BERG: That would be a conscious choice I’m unwilling to contemplate. That’s not to be rude or evasive, but reflects my writing. Aria’s Bayou Child is an example. While concentrating on mystery, I entered romances into the Dixie Kane Memorial Contest. Aria’s Bayou Child, under a different working title, envisioned to be an inspirational romance achieved a second place finish. However, as the story marinated and grew, the bayou whispered within my subconscious and an entirely new vista, not frilly and vacuous, laid down its magnetic welcome mat. I’d never before tried to outline a story into a specific genre. Always happy I don’t.

FQ: Your books are so well-written that it’s logical to assume you’ve become a mentor for writers out there. Do you have certain mentors who have helped you along the way, as well as any authors where you just wait in anticipation for their next book to arrive?

BERG: Thank you. However, writing is a challenge, always has been. I stumble. When serving with the U.S. Army in Korea, I came upon an oriental saying. It said: Fall down seven times, stand up eight. Not to digress further, there are so many “craft” books that can be beneficial. I’ve found helpful two written by Literary Agent Donald Maass. A fellow writer, Michael Hartnett, has been exceedingly kind and helpful. I’m on his subscriber list. As one who edits freelance, confidentiality limits what I can divulge, but the axiom for all writers to read whatever they can is a philosophy I endorse wholeheartedly. Join a book club. My prior answer mentioned that Aria’s Bayou Child started out under a different character name. That name was Amanda. The change required because, while in attendance at a book club, one participant, after the formal gathering ended, expressed spousal annoyance and explained how the offending spouse would meet death without the authorities being the wiser. The story percolated on my drive home and within a day it became a short story entitled Amanda. My version brought to the next month’s book club. However, I refused to let criminal conduct, even if facetious, go unpunished so, if you read it, you’ll find an O’Henry twist.

FQ: Along those same lines, is there any piece of advice you would give to authors who are just starting out on how to keep the passion alive that’s needed for writing?

BERG: Be true to yourself ranks as number one. A close number two is to be honest to the world. Not every person will praise your effort. Ireland exiled James Joyce. Number three is to study others, not to imitate, but to learn what strikes a chord within you. Be alert for the unexpected and the consequences, even if unsettling. And, remember there are sincere friends and family who wish you success as you express yourself in daring and creative ways. If you gaze from your typewriter or keyboard past the clear windowpane to the world, what do you see? A tree? The leaves waving? Is it a bright welcome wave, or a dark goodbye? Siberian buran or a sibilate breeze? Hopefully I sucked you into an exercise that, if repeated, will nudge you into your next sentence and on to infinity.

FQ: Your writing is so vivid. I was wondering if you had ever visited Louisiana and had a hands-on experience with the bayou and all of its’ mysteries? Along those same lines, is there a locale that you long to visit?

BERG: Yes, several times. Crawfish Etouffee and Mile-high cake beats bourbon. In fact, I’ve visited all fifty United States states, plus several foreign countries. It disappointed me last year when COVID-19 caused cancellation of a trip across South America and to the Scottish Highlands. I’d like to reschedule both, but it appears Scotland will open up first.

FQ: As a ‘sneak peek,’ so to speak, is any plot or character currently knocking on the walls of your mind that you are looking at making a book out of?

BERG: Characters, more so than plot, are always swimming inside my head. I always remember my first novel, A Body To Bones, and its completion after thirty years, see question 2. (P.S., I still have the original 53 yellowed pages typed on an “Agatha Christie” typewriter and the handwritten notes, plus other typed narrative.) After a sigh of relief to be finished, they asked me for the excerpt of my next novel. What? I didn’t have one. Three months later I did. Thus, I’ll never be so anxiety ridden again. Aria’s Bayou Child has an excerpt of a future mystery/thriller. My latest, Find the Girl, A Fantasy Novel, has an excerpt of a new fantasy. Both beyond excerpt stage. Since the adage says trouble comes in three, I’m well on my way to pull together another mystery. And, who knows, Sheriff Jonas McHugh is always willing to give me the lowdown on another caper and his friend, Jake Brown, may exit the Interstate long enough to let me warm up my fictional ballroom dance shoes. Happy you didn’t ask for a timeline, for today is always my best day to enjoy life. For your questions, my pleasure. Love to learn what impacts readers.

Posted by FeatheredQuillBookReviews at 9:14 AM