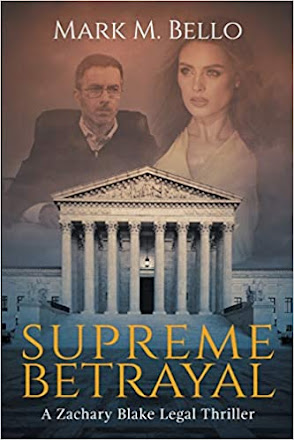 It will come as no surprise, for anyone who has had the brilliance of mind to pick up one of this author’s books, that Mark Bello is a retired lawyer. After all, each novel he puts out is more than realistic when it comes to storylines, characters, and locations. Think of it this way. They always say a chef excels when they cook the dishes they know. Well, for a writer, it is the same: Write what you know and you will excel. For Mr. Bello, having that law background has allowed him to carve out his very own award-winning niche in the very busy genre of legal/political thrillers.

This time around, we begin at a party being held inside a stunning lakefront home. Yes, all the young adults have gotten together to tie one on and celebrate life because the parents are away. Hayley Larson Schultz is a 16-year-old at this party, but she’s not exactly a wild child; she hasn’t even given up her virginity as of yet (which, let’s just say, is a novel idea nowadays). Although Hayley is among the “good girls,” that also means there’s something she does not have—street smarts. Very quickly into the book, Hayley learns that the male species is not very nice at times. She ends up sexually assaulted, turning this picturesque home into Hayley’s own personal nightmare.

We fast forward over two decades later and learn that Hayley’s attacker, Oliver Wilkinson, has graduated law school and has now become the president’s nominee to sit on the best and most powerful judicial body in the world: The Supreme Court. Although Oliver has enough wealth behind him so that he believes he can get out of any bad situation, Hayley has grown into a strong woman and is about to become his worst enemy. There is no way she can allow this heathen to achieve this kind of success. But she will not bring the glowing nominee down by herself. Zachary Blake, the lawyer who one and all have come to love through Bello’s books, once again is there to aide a victim and make sure that the truth sees the light of day.

What Hayley and Zachary do together in order to toss Oliver off his golden throne encompasses a series of amazing, intelligent and somewhat crafty scenes. There are times in this book where you will stop and wonder if Oliver Wilkinson is finally the one person Blake won’t be able to see fall. There are other times in the tale that you will be pumping your fists in the air and cheering for the fact that ‘good versus evil’ still exists and that good still wins out.

Told from alternating points of view so that readers get a real feel for each character and the heart and soul they possess, Supreme Betrayal serves up knock-out punches through words and actions creating a battle that even Rocky, himself, would be proud to fight.

Quill says: Powerful and, at times, gut-wrenching, this engrossing thriller shines the light on history, politics, and society’s errors to create an unforgettable read.

Posted by FeatheredQuillBookReviews at 10:15 AM