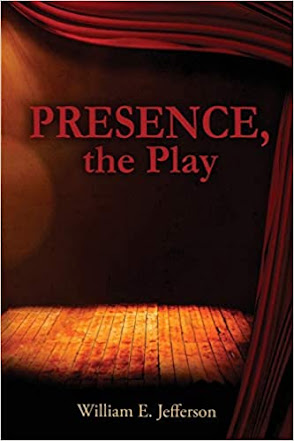 There are those books out there that make you think. Not only are you entertained by the story and intrigued by the characters, but the author does an intriguing job of offering up both darkness and light throughout. This is one that does just that, taking the reader on a full-scale ride that feels more like a fantastically acted film than words on a page.

Upon opening William Jefferson’s book, you find yourself at the Theatre Portesque. This amazing locale with the old, red velvet seats that reminds you of a different age, is absolutely packed; it is opening night, and they have come to see Presence play out before them.

We first meet Brother Plot. He has helped Brother Script put together this play and he’s excited to see it on the grand stage. He saves a seat so that Script, the playwright, can sit beside him when he arrives. Upon speaking with another thrilled visitor in the theatre, whose boyfriend will be the first member of the cast the audience will see, Plot learns that Script is beloved by many and that one and all are excited about the night.

The reader will find him beloved, as well. Script is a playwright but also a monk who lives on the Isle of Estillyen. He lives in a world that Tolkien would have absolutely loved. This is one of the most picturesque villages ever, and the land has a unique connection to all the main characters. An order of monks live on the island, men who belong to Estillyen’s Order of Message Makers (AKA: Storytellers) that dates back to the 17th century. All have chosen names to go by, such as, Chronicle, Saga, Script, Epic, Plot, Narrative, and Writer.

Instead of a lovely opening night, however, tragedy occurs when Script has an accident—he takes a vicious tumble in the balcony and is rushed to the Good Shepherd Infirmary in an ambulance. Plot, who has stood by Script’s side for as long as he can remember, comes with him on this journey, as well, and is heartbroken when he and Brother Writer reach the ICU and find out their friend, who was so full of life just a short time ago, has now fallen into a prolonged coma.

Upon speaking to the doctors, their diagnosis is revealed: Script is in this state but, thankfully, his vital signs are doing well. In fact, the brain scans done show Script to be alive and well, but stuck inside his own mind. He is in that inner consciousness – that network where doctors do not quite understand what is happening. At this point, all they know is that Script’s brain is experiencing a high level of activity, such as one would see in a chess player. Everyone knows there is something going on in their brother’s head, but all they can do is wait and pray for him to open his eyes and come back to them.

As Plot and the others leave the infirmary, praying with everything they have, readers stare at Script as he stands on a path that will lead him through the emotional, entertaining, dramatic and imaginative journey he’s about to dive into.

Told from Script’s comatose state until the end, the story that is woven by author William Jefferson is a grand one. At times, it feels almost like C.S. Lewis has joined forces with him, taking us into a new Narnia and opening up some of the most amazing and memorable scenes you’ve read in a long time.

Quill says: Presence, The Play offers a cast of characters in a fantastical realm that takes readers’ imaginations on a thrilling adventure!

For more information on Presence, The Play, please visit the website: www.estillyen.com

Posted by FeatheredQuillBookReviews at 10:23 AM