#BookReview - Nothing to Get Nostalgic About 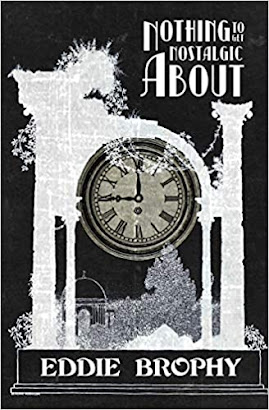 Nothing to Get Nostalgic About

In this multilayered horror fantasy by debut novelist Eddie Brophy, a man has earned an enviable chance at the limelight in his career, but remains so haunted by his childhood that he can barely cope.

Charlie Harris is tormented by memories and demons that have chased him for much of his life. Addiction has plagued him since growing up with parents who were addicted, alcoholic, and insane and who knowingly moved the family into a sinister, tragedy-soaked house. In the case of Charlie’s father, the insanity takes the form of sadistic displays and torturous punishments, with his young son and two older daughters as the often chosen victims, though the girls may be getting the worst of it, as bloodied wrists and a baby with no identified father eerily attest. Young Charlie, who fears darkness and has a weak stomach, possibly from the pills his mother forces on him, feels compelled to bury his one source of comfort, his “blankie.” Something has to change; but when change comes, it will not make Charlie’s life easier, as the specters that dogged his youth will not easily release their grasp.

The book opens on what should be a happy time, the night before grown-up Charlie, now an acclaimed author, is to receive a significant award from his former alma mater. But he wanders out after a spat with his wife, and does just what she accuses him of – drinks some booze, then talks openly with a spooky acquaintance about the very things he fears most – not being able to protect his toddler son from the monster that devastated his own boyhood and has never loosened its grip. In an ironic twist of Brophy’s elaborately constructed plot, one book for which Charlie is specially lauded carries a disturbing resemblance to his real life fears and foibles. The only thing, it seems, that can free Charlie Harris from his fraught past is a meeting with a woman appropriately named Destiny.

Brophy has paced this mysterious, at times mystical, drama with great care. There is a significant chronology, with the plot providing a lively cluster of incidents before and after the one chilling event at its heart. The inner thoughts, feelings, and conjectures of the characters – especially Harris, his sisters, and an investigator connected to some of the unsavory circumstances – smoothly stoke the action. Too, this is a notably intellectual epic, filled with well-drawn portraits of brainy men and women trying to examine and understand their bizarre situation through the symbols and metaphors of time-honored literature along with some more current media sources.

Quill says: Readers who like their fantasy laced with fear, and reality overlaid with the supernatural, will find satisfaction with Brophy’s imaginative concoction.

For more information on Nothing to Get Nostalgic About, please visit the author's website at: eddiebrophywriter.weebly.com

Posted by FeatheredQuillBookReviews at 10:09 AM