#BookReview - The Hunting Wives by May Cobb 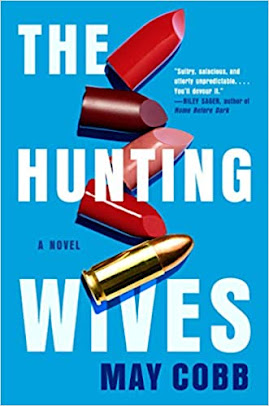 How far would you go to fit in? A new resident of small-town Texas, Sophie O’Neill, would find her answer to this question in The Hunting Wives by May Cobb.

The story all unfolds from the perspective of Sophie O’Neill, a former high-powered lifestyle editor from Chicago who has moved back with her family to a small town in Texas. She wanted to escape the bustling metropolis, have a change of pace, and settle into a more relaxing lifestyle. She thought that Mapleton, Texas could be the right place to raise her 3-year-old son and get on a fresh slowed-down start. Coincidentally, this was also the town where she grew up so she expected to settle in fairly easily.

While Sophie’s architect husband, Graham, was busy with his job, she occupied herself doing a lot of various things. Sophie spent her days curating her Instagram account, writing her blog, and jogging in the woods. There really weren’t a lot of things that she could do in such a small town after all. However, it seemed as if the slowed-down, relaxed lifestyle that Sophie originally wanted was starting to get old pretty fast. She was getting bored and she was starting to miss the big city life and all the excitement and grandeur that comes with it. As a result of that, she also spent an inordinate amount of time stalking people on social media, namely, the mysterious and alluring resident socialite, Margot Banks.

After one dinner party, Sophie got pulled into Margot’s little inner circle called The Hunting Wives, a group of four wealthy and entitled married ladies (now five, courtesy of new joiner, Sophie) who meet up on Friday nights for some good old ladies’ night out that typically involved skeet-shooting, a lot of alcohol, and some salacious seduction of both men and teenaged boys alike. Sophie knew that these women’s actions were morally reprehensible but she stayed in the group and started lying to her husband about it. When Sophie crossed the line that could potentially put an end to her marriage, she thought it was best to stay away from the group. However, her inexplicable obsession with Margot Banks kept her coming back, over and over. Sophie’s life started falling apart when she found herself in the middle of a murder investigation of a teenager, shot to death on the very land where The Hunting Wives shoot skeets.

The Hunting Wives by May Cobb is a scandalous and racy whodunnit domestic thriller that starts slow, picks up halfway through the book, and then rushes the ending. The scandalous and racy scenes start early on but you don’t get to see the actual conflict until halfway through. The interesting thing here is that we see the story unfold through the eyes of the main character, Sophie, who was as unlikeable as they come. She was frivolous, indecisive, and totally gullible. The entire mess that she was in, she got into due to her series of bad decisions after bad decisions. So if you’re the kind of reader who starts a book with the expectation of liking, empathizing, or even just relating to the characters, then this is not for you. While I would have enjoyed the story more had there been a greater emphasis on the “whodunnit thriller” aspect instead of the scandalous and racy scenes, the author did a good job in creating characters you "love to hate." I enjoyed hating Sophie and her "friends."

Quill says: This is a Real Housewives-esque story with a dash of murder and characters that you would love to hate.

Posted by FeatheredQuillBookReviews at 11:38 AM