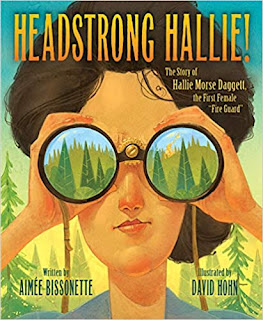 Get ready to meet one amazing, headstrong young woman who doesn't let the word "no" stop her from reaching for her dreams.

Meet Hallie Morse Daggett, a young girl who lived with her family among the trees and forest animals of California's Siskiyou Mountains. Born in 1878, Hallie's favorite thing to do was to hike through the woods, go hunting, fish along the shores of the Salmon River, and explore the various trails near her home. Nothing scared Hallie except...forest fires.

As a child, Hallie and her sister Leslie would help the fire crews by stamping out forest fires as well as bringing food and supplies to the men who fought the fires. Hallie decided that she wanted to join the US Forest Service when she grew up. There was only one problem - in the early 1900's when Hallie was ready to apply for a job, the US Forest Service wouldn't even consider hiring a woman.

In 1910, Hallie wrote a letter to apply to the US Forest Service. She was not hired. But she didn't stop. She wrote more letters and never gave up. Finally, in 1913, the ranger who was in charge of hiring decided to take a chance on Hallie - he knew that there was no one more familiar with the mountains and no one more determined to protect the land.

Headstrong Hallie is a great look at an amazing, and very determined, young woman. In a time when woman were expected to stay home and learn how to be a housewife and mother, Hallie had other ideas. Her story is an inspiration to all young girls. The book covers both Hallie's early life and what led to her determination to become the first "fire guard," as well as her life working at the remote Eddy Gulch station where she could see both Mount Shasta to the east and the Pacific Ocean to the west. At the back is a two-page Author's Note with a more detailed look at Hallie's life.

Posted by FeatheredQuillBookReviews at 11:12 AM