#BookReview - A Web of Deceit by Gary D. McGugan 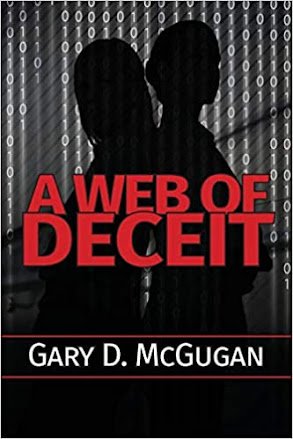 A Web of Deceit

Gary D. McGugan delivers the next exceptional read in his latest Multima thriller series, A Web of Deceit.

It’s January 2020 in Fort Myers, Florida and Multima Corporation’s CEO, Suzanne Simpson, is the epitome of ‘no rest for the weary.’ As she wraps up her review of the previous day’s sales results for Multima Supermarkets, she’s interrupted by a light knock at her door. Executive Assistant Eileen tenuously announces there are two FBI agents in the lobby asking to meet with Ms. Simpson. Not sure what the FBI could possibly want with her, she nods her consent to Eileen to show the visitors in. Just like a scene from Dragnet, the senior officer flashes a badge, and introduces himself as Agent Burke. Before Suzanne has a chance to inquire as to the nature of their business, Burke wastes no time in informing her they’re acting on a warrant for her immediate arrest by the Department of Justice on five separate charges under Section 1956 of The Money Laundering Control Act of 1986. Fortunate for Suzanne, her assistant is capable of more than serving coffee and typing memos and had the foresight to contact Alberto Ferrer, corporate counsel as he burst through the door not a moment too soon.

Meanwhile The Organization is holding some of the cards in this latest charade that Multima Corporation is being sucked into. At the same time Suzanne is about to be arrested, Fidelia Morales is dancing in the heady euphoria of her newly (and self-appointed) role as boss of the most powerful organized crime unit in the world. About to jet off from Aime Cesaire International Airport, Martinique, she reflects momentarily on her judgment. With crime boss Giancarlo Mareno out of the way for good, she knew he would have never let Howard Knight live. Who cares? Giancarlo is dead and there’s a new Sherriff in town. Besides, Howard won’t be going anywhere anytime soon. After he wounded Giancarlo with a first shot from a hidden weapon, Fidelia wasted no time in finishing off the boss with three shots from her Smith & Wesson 460XVR. She offered Howard a place in her new Organization, but he declined. For now, she’d walk away and give him that false sense of security that he was ‘free’ at last. She has another job for him...soon. For now, let him think he is done with The Organization.

I’ve had the pleasure of reading the first three titles in this series (Three Weeks Less a Day, The Multima Scheme, and Unrelenting Peril). A Web of Deceit is the fifth book in the series, and I commend Gary McGugan on his outstanding ability to craft each novel so that it can stand on its own merits if one were to read a title in this series out of sequence. However, I highly recommend reading them all. The thrill, adventure and energy that jumps off each page is exhilarating. In the preface to this current work, there is a very useful organizational chart that maps out the roles that Multima Corporate plays, Law Enforcement, key Organization players and the ‘Freelancers.’ The latter group are former employees of Multima Corporation. This is a complex read in terms of the depth of detail, but the pace is at warp speed and McGugan does a phenomenal job of keeping his audience engaged from the onset to the bitter end in this ongoing saga of justice versus injustice. I was thrilled when asked to read and review this title as I’ve been a fan of this series since the first book. Well done Mr. McGugan. I cannot wait to read what happens in the next installment. Surely, there will be another.

Quill says: It’s wheels up once again! Multima Corporation has taken flight into another epic battle you don’t want to miss.

For more information on A Web of Deceit, please visit the author's website at: www.garydmcguganbooks.com.

Posted by FeatheredQuillBookReviews at 12:59 PM