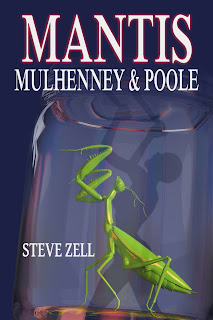 It is the blistering hot summer of 1968, and Investigative Reporter Deanne Mulhenney awakens to an odd headache. She’s more than a bit confused, and when she staggers out of bed and looks up into the bathroom mirror, the image of her face seemingly disappears. All she gazes upon is a bright blue moon and a star that suddenly flashes before her eyes. She watches the star turn into an all-too-familiar shot of fire that shatters the mirror and, once, shattered her world.

Medical Examiner Sara Poole is back in Los Angeles, but instead of being next to the phone ringing in her rental home on Hermosa Beach, at this moment she’s standing on a balcony looking out on Hollywood Boulevard, not knowing her own world is about to be altered again.

Soon, Sara finds herself at work staring down at a corpse that is a floater from Sara’s own past. The swollen body is Sondra Tucker, just one of the people who was involved in a full-scale murder campaign that she and Deanne had investigated in Arizona. A young man she works with named Ben asks for information. He asks to have a drink with his boss because he wants to learn exactly what happened to her on her supposed vacation to Arizona; a trip that not only seemed to change everything about Sara, but had also opened their lab to the FBI.

What Ben doesn’t know (yet readers who read the amazing book by Zell titled True Creature know), is that when Sara went on holiday to Phoenix, she’d actually gone there to solve a crime. Sara was looking for data about two victims that she and Ben had autopsied in L.A. who were strangely tied to two other drowning murders in Phoenix. The oddity came from the fact that only one out of the four men had drowned in an area that had enough water to actually do the trick. Sara can’t explain to her assistant the secrets she’s holding because of that case, nor the personal pain she felt when it ended.

Later in the week Sara answers the phone to hear Deanne’s voice. Deanne has suffered through the nightmare once again, always remembering the sniper who’d shot a suspect in the Arizona case right before Deanne’s eyes; she can’t forget that moment because she still waits for him to come back and carry out the threat he once made against her.

Sara learns that Deanne has gotten her old job back at the Arizona Tribune – a supposed gift for all the work she’d done in solving “The Lilly Murders.” Of course, the job was actually a reward for how she and Sara had buried the real story that the ladies refer to as ‘true creature’ between themselves. But as Sara listens to her tale, she also hears the strange chaos out on the street and the wail of a siren in the distance. Hanging up, she heads out on the beach toward Detective Rick Cromwell, a man so perfect looking that he should be in movies, and spots yet another floater. A corpse has been found by a now traumatized little boy, and because of its’ headless state, Sara and Rick know this is definitely a professional hit.

Is the violence starting up again? And, if so, is this a continuation of the women’s ‘true creature,’ or a brand new one that will bring more pain and violence into their lives? Add in drug dealers and a Don from Mexico; a murderess that children refer to as ‘the alien’ working the streets of NYC; Johnny Handsome; Gorain Evanov and the exciting appearance of “The Mantis” in 1945 Berlin right before Hitler took his own life—and so much more—and you find yourself on a thrill ride that combines the past and present in a way you will never forget.

For those not already a huge fan of Zell’s work—both the standalones and Mulhenney & Poole, who have now become a duo—after reading this one, you most definitely will head to his website to learn about some of the greatest adventures out there.

Quill says: Zell knocks it out of the park with his Investigator/Medical Examiner team that is as entertaining and exciting as Mulder and Scully.

Posted by FeatheredQuillBookReviews at 3:35 PM