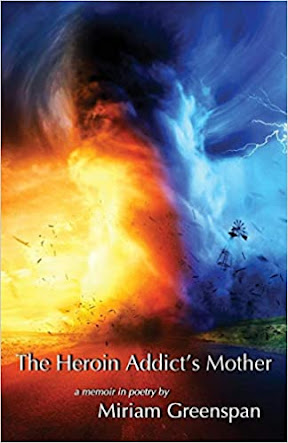 The Heroin Addict’s Mother: A Memoir in Poetry

Miriam Greenspan, noted psychotherapist and author, here uses the medium of poetry to express the many deep feelings evoked as she learns about and comes to grips with her daughter’s addiction.

Greenspan’s saga begins with a phone call: a stranger has discovered her daughter in New York City –“she’s shooting heroin on the street.” She finds her child, a product of the best schooling who as a toddler “knew the Latin names of fish” now

...naked
on a once white towel
in a Westside hovel.

“Cold as a corpse,” her girl is trapped in a self-made Hades. She is living a degraded life, at the mercy of dealers who demand, and get, sexual favors. The spiral downward began with legal prescription medications in college, to the “black seeds” of heroin and a bare survival underpinned by lies and thievery. Well-meaning friends offer Greenspan advice:

Greenspan attends meetings, hears horrifying stories from other parents, tries to forgive herself for anything she might have done to let this happen, and finds herself caught in the generation between Holocaust survivors and a child who is creating and living in her personal holocaust. She must choose to cosset her daughter and try to be her ally in getting through and beyond her addiction, or coldly ignoring her and forcing her to “suffer the consequences of her actions.” All avenues of help seem futile – sent to a halfway house with daily urine checks, the young woman still finds that “buying smack was easier than ever,” and methadone appears to be just another dependence without end. In these agonized plaints, Greenspan sometimes imagines that her daughter is “dead,” yet refuses to believe that or to wish for that outcome. Small rays of hope filter through:

Sometimes a fact-tight narrative of the sort that Greenspan is accustomed to writing (A New Approach to Women and Therapy, Healing Through the Dark Emotions) cannot provide the solace of a metaphor strongly stressed, or a sensitive story from an omniscient observer. Greenspan’s works in this emotive collection speak of sorrow at the breakdown of her daughter from promising, intellectually gifted child to someone with needle marks all over her body, as well of the outrage that we all might feel when looking at the broken system that makes drugs like heroin so easily available and of the pharmacology industry that has almost nothing to offer, it seems, by way of a cure. It took true courage to compose this cathartic work that can offer comfort and perhaps a new, enlightening perspective to parents and loved ones of those caught in addiction.

Quill says: In The Heroin Addict’s Mother, Miriam Greenspan presents an honest view of an undeniably difficult, distressing subject, and in doing so may help others who struggle with similar challenges.

For more information on The Heroin Addict’s Mother: A Memoir in Poetry, please visit the author's website at: miriamgreenspan.com

Posted by FeatheredQuillBookReviews at 3:48 PM