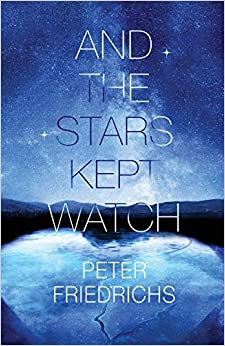 FRIEDRICHS: I’m a New Englander at heart. I attended college in Massachusetts and moved to Maine after graduating from law school. My wife and I lived in southern Maine for nearly 25 years and raised our girls there, so there’s a reason And the Stars Kept Watch is set in that part of the world. There’s only one scene in Stars that is semi-autobiographical. It’s when Nathan is hiking in the White Mountains of New Hampshire like he did when he was a boy attending summer camp nearby. I did the same, and it was in those pre-teen years that I developed my love of the outdoors. I still love to hike, even if it’s just around a local State park here in southeast Pennsylvania where I live now.

My career path has been pretty circuitous. I worked for about 15 years as a lawyer, both in private practice and as in-house counsel for a Maine-based company. I did a stint in Boston as the Human Resources Director of a small start-up but, shortly before I turned 50, I decided to take a hard turn out of the for-profit world. I spent the next 4 years in seminary, training to become a Unitarian Universalist pastor and in 2006 I was called to serve a congregation outside Philadelphia. I’ve been there ever since, and I love the work because it provides me the privilege to build deep, meaningful relationships with people. Plus, they pay me to write!

Like my career path, my path to writing Stars was anything but direct. Capturing thoughts and putting them down on paper has always come easy to me, but up until recently my writing was always work-related: I went from writing college papers to legal briefs to sermons. Then, about a decade ago, I began to write poetry and that unlocked the creative side of my brain. The leap from the short-form of poetry to long-form fiction was a big one, but I’m glad to have made it.

FRIEDRICHS: Stars takes a family and rips it apart. We have this idyllic family living an idyllic life until tragedy strikes, and the two young children are killed in an accident. The twist is that the accident was caused by their father. You could call it a momentary lapse of judgment or simply bad luck, but it was his decision that led to their deaths. How can the parents recover from such a horrific loss? Can they recover together and remain a couple? And the Stars Kept Watchtraces Nathan and Catherine’s journey and takes the reader on a deep dive into grief, guilt, recovery and forgiveness. I think what makes my book unique is that it doesn’t shy away from the hard questions. With characters that many of us can relate to, it compels us to confront the razor’s edge we all live on, where everything can change in an instant, and what happens to two people when it does.

FQ: What was the impetus for writing your book?

FRIEDRICHS: The impetus came unbidden. It all started with a nightmare I had that I couldn’t shake, and that nightmare became the tragedy that happens in the opening pages of Stars. At first, I just wanted to write the nightmare out of my head. But once I did that, I became engrossed with the characters and began to wonder what happened to them after the accident. As a church pastor I’ve walked with many people on their journey from loss to whatever “recovery” might look like, and it’s never as clean-cut as the so-called “stages of grief” we’re told we’ll follow. I realized that I could use Nathan and Catherine’s loss to help people understand just what a tangled ball of string grief really is, and how uncertain the outcome can be.

FQ: What was the hardest part of writing your book? That first chapter, the last paragraph, or ...?

FRIEDRICHS: The first “hardest part” was narrating the accident, describing the terror the children felt and the desperation of their father. In my nightmare, this accident happened to my grandsons and my son-in-law, so it felt very real and raw. It probably wasn’t until the third or fourth draft of the book that I was able to get any emotional distance from those early scenes. The other hardest part was getting to the crossroad that Nathan and Catherine get to in the book and deciding whether or not they’ll ultimately stay together as a couple. I stood at that crossroad for about 6 weeks before committing to the path I took with that question.

FRIEDRICHS: I’m a big fan of magical realism, so I’d have to say Gabriel Garcia Marquez. One Hundred Years of Solitude blew me away when I first read it as a teenager, and it’s one of only a handful of books I’ve read more than once. I can’t conceive of what it takes to imagine worlds within worlds and then to write them into being with such lyrical prose. If I was able to have a dinner party, I’d invite Mark Helprin, Isabel Allende and Sofia Segovia to join us. (I’ve recently read Segovia’s The Murmur of Bees and was thoroughly entranced.)

FQ: If you were to teach a class on the art of writing, what is the one item you would be sure to share with your students and how would you inspire them to get started?

FRIEDRICHS: For me, writing is something of an intuitive endeavor, so I guess I would want my students to learn to trust their gut and let a story go where it wants to go. Don’t try to force your characters down a certain path. Let them find their way and then walk it with them, enjoying the discoveries that are revealed.

FQ: Did your family & friends encourage you to write your book?

FRIEDRICHS: I’m blessed to have an incredibly supportive wife who has always believed I could write a novel. She’s urged me to try it pretty much from the day we met. My adult daughters, my parents and my siblings have all been encouraging along the way, and I’ve got a few friends who have been very patient with me throughout this process. It’s cliché, but true, that it takes a village.

FQ: Was the plot worked out completely before you started or did it evolve as your wrote?

FRIEDRICHS: What I enjoy most about writing are the surprises you encounter along the way. I think I’d hate to write a book where I knew everything that was going to happen to the characters. It’s the unfolding, the characters and events that just happen to show up, and how they drive the plot that I love. When I first entered the ministry, I used to write sermons with the end in mind. I knew what I wanted to say and the message I wanted to leave folks with. And that was so hard and unsatisfying. Within a year or two of trying to force a sermon to go where I wanted it to go, I learned to let go and allow it to go where it wanted to go. It takes a great deal of trust to do that, but I’ve never done it any other way since. That’s the way Stars was written, and the way my next book is unfolding.

FQ: Are any of the characters based on real people you know? If so, how closely does your character mimic the real person?

FRIEDRICHS: The only characters based on real people are Nate and Catherine’s two boys, Joe and Jacob, who are modeled after two of my grandsons, and Nathan’s therapist, Robert Heasley. I have a friend who generously lent me both his name and his professional advice for the book, for which I’m grateful. While there are quite a few “Easter Eggs” sprinkled throughout the novel that those close to me have enjoyed, all the other characters are purely fictional.

FQ: What was the most difficult scene to write and why?

FRIEDRICHS: Writing the scene in which the children die was excruciating. We’ve all heard the writing tip that as authors we must be willing to “murder our darlings,” but in this case that felt all too literal. That said, writing that scene was also cathartic. Getting it down on paper had the desired effect: it enabled me to get un-stuck from my nightmare and to move forward. And look where I ended up!

For more information on And the Stars Kept Watch, please visit the author's website at: peterfriedrichs.net 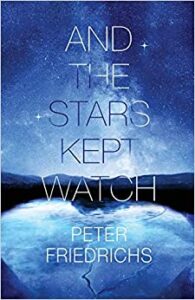 Buy on Amazon
Posted by FeatheredQuillBookReviews at 1:32 PM