#AuthorInterview with Cam Lang, author of The Concrete Vineyard 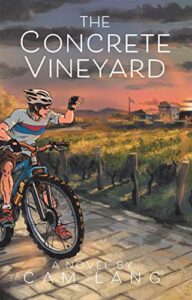 FQ: How did you come up with The Concrete Vineyard’s unique plot? What was your inspiration?

LANG: My novel has a very complex and layered plot but all the events, situations and scenarios that occur within it are things that I have witnessed in my profession as an urban planner (except for the murder!). Although citizens tend to focus on what’s happening at the highest levels of government (especially federal), we are actually more impacted in our day to day lives by the decisions that are made at the local level – how we design our neighborhoods; the form and height limits we impose on buildings; the siting and cost of parking; and the bike lanes we install or rather, fail to install. The list is endless and because every municipality in the U.S. and Canada employs elected officials, they are all vulnerable to influence and corruption. Land developers represent those primary change agents and urban planners are at the heart of this game.

FQ: The setting of The Concrete Vineyard is also unique, Niagara-on-the-Lake. I see that you grew up there. What gives the area the “colonial charm” that you mention in your biography?

LANG: Niagara-on-the-Lake ‘NOTL’ (the first capital of Upper Canada) has a lot in common with Colonial Willamsburg (the second capital of Virginia) in terms of its gridded street pattern, its historic centre (1 mile long x ½ mile wide), and its centuries old buildings of Georgian, Regency and Victorian design that flank and frame corridors of interlocking brick and sandy boulevards. But, once you pave and curb and gutter the roadways, much of that ‘colonial charm’ erodes. And then it is further compromised when you bring in the cars and park them along the entire street edges. This is the current situation in NOTL; a tipping point, really. It would be prudent to use Williamsburg as a model of sustainable historic preservation for NOTL and I do believe that will happen at some point; perhaps when civic unrest and political will can overcome private agenda.

FQ: Have you always been a fan of detective stories/murder mysteries? Any favorites? Any that might have inspired Detective Bryan Dee?

LANG: Until I started writing this book, I wasn’t even a fan of fiction. I considered reading fiction a waste of time because I didn’t feel like I was learning enough. The Concrete Vineyard started off as a non-fiction account of planning problems until I realized the only people who tend to read urban planning books are other planners. Because I wanted my book to appeal to a greater audience I figured the best way to do that was to kill someone. So I knocked off the oldest and most respected civilian in town.

FQ: It’s apparent that you are fascinated with wine/grapes and that you’ve experienced first-hand what it’s like working in a vineyard. Can you tell our readers something they might not know about vineyards, harvesting grapes, etc.?

LANG: I was a complete hack in vineyards and fruit farms as a teenager. I usually just ate the cherries and peaches and sat on the tractor, waiting for lunch and watching others. Pruning grapes is particularly hard on your back because you’re often bending over and crouching down all day. As I allude to in my novel, the only people who step up to do this work now are migrant workers. They’re the front-line heroes in our agricultural industry and they should be applauded and supported. Nowadays though, a lot of this manual labor has been automated. I am in awe of some of the tractors and machines that farmers employ now.

FQ: Your characters are quite fond of playing golf. Are you a golfer too?

LANG: My lead detective is certainly fond of golf. I enjoy it but I’m hardly good at it. I’m an avid runner and cyclist, like my protagonist, Kris Gage. Although I’m Canadian, my favorite sport isn’t hockey, but basketball. I used to attend Jimmy V’s summer camps in Raleigh as a kid. I’m a diehard, long suffering Wolfpack fan. Never give up.

FQ: Urban planning plays an important role in your book. And in your biography, you mention that it can be “a pretty boring subject.” So it’s a brave move to include it in a murder mystery and make it interesting at the same time. Was this something you knew you wanted to include in your story before you began writing?

LANG: I joke that everyone has a “planning opinion” so people should be able to relate to this story. The challenge for me was to try to figure out how to get an urban planner involved in a homicide investigation. Admittedly, it is rather unconventional; in fact, I can’t find another ‘urban planning mystery’ out there. I used Kellerman’s Alex Delaware series as a model in which he uses a psychologist to help his detective friend. I figured that if I made real estate or land development a possible motive to murder someone, who better to understand and navigate those waters than an urban planner? This is why my homicide detective (Bryan Dee) is a little naïve and unenthusiastic. It opens the door for his urban planner friend to get involved.

FQ: As an urban planner, what can you say about Canada’s town planning?

LANG: To answer that I’ll use a line from my book. By failing to recognize that different places require different approaches and solutions, it was no wonder every town and city was starting to look and feel just like the next. In reality, this statement could apply to any country.

FQ: Progress comes with a cost. Old and historic sites sometimes get neglected to make way for new developments. How do you negotiate with clients and/or developers? How do you balance profit and historic preservation?

LANG: One of my developer clients once told me that he was only as good as his last project. At first I didn’t know what he meant but then I realized he understood the value of playing the long game. On one of his early projects he preserved and restored a questionable heritage building that – had he fought - he probably could have demolished for a more lucrative financial gain. Years later, on another project, the city unexpectedly rolled out the red carpet and gave him more density than he initially asked for without any public objection – Councils and residents have long memories and just like any relationship, building trust is important. If a developer seeks to squeeze everything possible out of a site and maximize financial gain on every project, it will do so at its own peril. More often than not, however, smart developers realize there is value and profit to be made by utilizing the important history of a site (or its natural heritage features such as woodlots/trees). This is referred to as ‘net community gain.’

FQ: Which cities in the world do you think has the best and worst urban planning?

LANG: It really depends upon the lens you use to evaluate ‘best’ and ‘worst.’ I tend to use good mobility as my key barometer for judging places: the ability for people of all ages and capabilities to perform their daily functions and activities without getting into a private automobile. Smart towns and cities usually integrate a number of modes (subway, bus rapid transit (BRT), bicycle lanes) to increase efficiency and choice with a goal of reducing carbon emissions. Bogota, for example, utilizes gondolas to move residents from its hillside shantytowns connecting to BRT in the city, leveling the playing field by creating affordable opportunities for its less affluent.

Generally speaking, people tend to think the grass is greener on the other side. In my novel I discuss the influx of wealthy Torontonians who choose to retire to Niagara-on-the-Lake. They come here for wine, water, golf, theater and a more laidback lifestyle but little do they know they left behind neighorhoods in a bigger city that were far more walkable, dynamic, vibrant and dare I say, quieter. They now have to drive everywhere they want and need to go – and listen to the bird bangers in the vineyards wake them up at 6 a.m.

FQ: Do you have another book you’re currently working on? Will we be seeing Detective Bryan Dee again? Perhaps in a series?

LANG: I didn’t set out to write more than one book which probably explains why The Concrete Vineyardis on the longer side and full of anecdotes, facts and details that may not appeal to the conventional mystery reader. I wanted to give readers a 10 course meal. If I was to write a second novel or continue the series, it would be with Kris Gage as my main character. He’s the urban planner. He’s who I know. Maybe he’ll show up in your hometown.

Posted by FeatheredQuillBookReviews at 12:34 PM