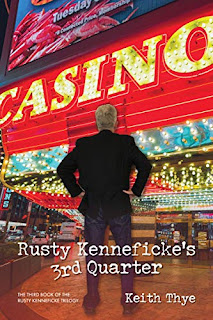 Readers were left shocked at the end of the last novel when Rusty found himself in one of the worst possible situations a person could ever find themself; being the prime suspect in a recent murder. To make matters worse, the murder happens to be of his longtime archnemesis, Boomer Laughlin, who just recently appeared in the town where Rusty and his wife Jan were living, threatening to kill Rusty. All fingers unfortunately pointed directly at Rusty being the murderer for several reasons. First, he was recently overheard saying maybe he should just try to kill off Boomer Laughlin before Boomer attempted his murderous revenge upon Rusty, and second, but perhaps the most damning of evidence, was that Boomer’s girlfriend reported that she saw Rusty drive off in the vehicle that killed Boomer. Unfortunately, Rusty also had no alibi to corroborate his story that he was nowhere near the scene of the crime, and was instead on his usual weekly solo trip riding his motorcycle far away in the mountains.

A few successful years went by for Rusty, his wife Jan, and their motorcycle business, and while he remained the prime suspect in the murder of Boomer, no new leads were discovered and the case went cold. Rusty and Jan continued to expand their business (of course not without a few bumps in the road), but the specter of Rusty being the prime suspect in a murder continued to loom over their heads. While Rusty can’t exactly figure it out, he suspects someone has set him up to take the blame for Boomer’s death. But who?

Meanwhile, much like the previous book, two new characters are introduced and expanded upon: Lindsey Fisher, Boomer Laughlin’s supposed girlfriend at the time of the hit-and-run, and Lindsey’s new man, Barry Marcini. Lindsey remains steadfast in her conviction that it was Rusty who killed her boyfriend, but she’s never officially called to testify and eventually moves on with her life to Las Vegas with Barry. Mr. Marcini is a businessman with quite a shady past, starting with his juvenile gang involvement, and working his way towards owning several strip clubs and eventually pawn shops, as an adult. While Lindsey and Barry were busy intensifying their personal relationship over the years, they solidified their professional relationship as well by collaborating and expanding Barry’s business interests into jewelry stores and debt collection agencies. Never a person to simply be content with what he has, Barry decides his next business deal will be to join a group of investors interested in purchasing a casino. However, he doesn’t quite have enough money to make the initial payment to join the group, but he’s willing to do anything to come up with it. But will this move prove to be successful for Barry, or will it be his demise? And how does a strange twist of events eventually entangle Barry back with Rusty Kenneficke?

Rusty Kenneficke's 3rd Quarter is, as previously mentioned, the last novel in the trilogy, and is just as well-written and engaging as the first two. The author continues to not only fill readers in on Rusty’s latest whereabouts, but like the second novel in which he expands upon Boomer Laughlin’s life, this time the author takes his readers on another equally compelling adventure into the lives of Lindsey Fisher and Barry Marcini. The first several chapters have some repeat story from the previous books, and while this inclusion could be a helpful reminder to some readers, I felt like it could have been condensed a bit because I found myself anxiously skimming these parts in order to quickly get into the thick of the new story. But this should not deter potential readers from diving right into this book and experiencing Rusty Kenneficke’s final exciting adventure.

Quill says: Rusty Kenneficke’s 3rd Quarter, the final book in the Rusty Kenneficke trilogy, has a good plot, and a few twists that keeps readers engaged and guessing if Rusty will ultimately be able to get out of his worst predicament ever, right until the very end.

Posted by FeatheredQuillBookReviews at 12:15 PM