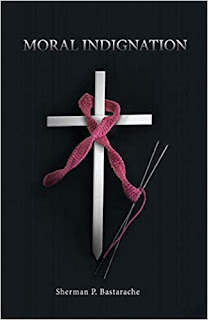 Sherman P. Bastarache’s Moral Indignation is a challenge to his readers to open the mind and consider the ‘...impartment of a soul and human dignity…’ when seeking the balance between morality and science around Embryonic Stem Cell Research.

To sit and attempt to unpack the plethora of considerations outlined in this book is a monumental feat in and of itself. Before diving into Chapter 1, Mr. Bastarache’s starts with a Preface. His explanation is simple: ‘I was not going to include a preface in this book, but I felt it necessary to inform the reader of certain facts. The main one being that it is not possible to cover all the content of this subject in anything resembling complete detail.’ I could not agree more. The depth and breadth of information, subject matter, opinion, etc. within the covers of this 280+ page book is mind-boggling. Immediately beyond the preface, the tone is set in Chapter One, ‘The Knowledge Tree.’ The notion of ‘...In dealing with faith and reason, some of you, reading this book, will be tempted to close your minds...’ nuances the dichotomy between faith/religion and bare bones science, ergo, which side are you (figuratively) on?

The complexities of this body of work continue to evolve. Moving on to Chapter Two, ‘Modus Operandi,’ Mr. Bastarache presents food for thought around evangelical ministers and how they define their description of God. Is the foundation of who God is based on faith? Belief? Both? After birth, ‘...the scriptures indicate one must first believe, and then be baptized...’. Bastarache’s argument is there aren’t scriptures indicating anything to the contrary, i.e., ‘...Baptism does not save you! Believing saves you!...’ Continuing on, Bastarache presents scientific theory and consistently attempts to balance the argument with theology. There are foundational arguments around when is a life a life as much as when is it safe to perform stem cell studies without threatening the sanctity of life?

I tip my hat to Sherman Bastarache for writing such an in-depth body of work on a controversial topic. There is a strong argument and view on both sides of the coin—science and religion, in addressing the ‘morality’ (or lack thereof) toward Embryonic Stem Cell Research. It is abundantly clear Mr. Bastarache has woven his theories and opinions throughout the book, but not with arrogance. Rather, he took his time with carefully crafted theories and left it up to the reader to decide: is this moral or is this for the greater good of progress, scientific breakthrough and a necessity to the continued evolution and advancement of man? In the next breath, he plays with his audience and strips the theory of science away and leaves it up to the reader to consider, perhaps the overall research is unnatural and all rests in God’s hands. This was an interesting and quite thought-provoking read. This book is not ‘light’ reading but is bountiful in its delivery of both scientific basis as much as theological considerations.

Quill says: Moral Indignation is a well-balanced and foundational read that enables the reader to enlighten him/herself with both ‘science’ and ‘faith’ when it comes to understanding the importance of Embryonic Stem Cell Research whichever side one considers.

Posted by FeatheredQuillBookReviews at 9:46 PM