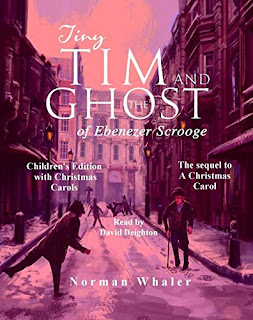 FQ: You obviously have a deep love for Dickens and A Christmas Carol. What is it about this story that captivates you?

WHALER: Yes, that’s true! (Lol) The message I love the most is that every one of us is redeemable, no matter how far down we are!

FQ: Kindness is a theme that runs strongly through your story. In this hyper-crazy time we’re living in, what can people do to spread a little kindness?

WHALER: One can open a door, carry a heavy package, or maybe simply say a kind word to someone who needs it! If everyone did just one act of kindness a day for another person, can you imagine the different world we could make together?

FQ: I love the “feel” of the illustrations in your book. Would you tell our readers a little about the process of working with your illustrator(s) and what you wanted to convey with the drawings?

WHALER: For myself, I always prefer illustrations that have what I call ‘movement,’ an ‘action’ from the story that helps propel the story forward and that makes, I think, the story much more interesting. Static (or still-lifes, I call them), as beautiful as they may be, doesn’t do this nearly as well for me. I always give illustrators very detailed notes of what I am looking for including character actions, positions, and background ideas. And trust me, illustrators appreciate it! This style is called ‘Fantasy’ and has a realism element I love.

FQ: A lot of young readers today look at a Dickens novel and only see the “long” story and “difficult” language and stay away from his writings (or complain miserably if forced to read a Dickens tale). They want the quick and easy reads. But his stories are so rich and vivid. What would you say to a teen or even younger reader to encourage them to try a Dickens novel?

WHALER: I would say, “Really? Dickens’ books reveal flawed good guys, devious bad guys, unsavory characters throughout, painfully unflattering details with a dose of sarcasm, eccentric characters, humor and life lessons, struggles and victories, love won and lost, moral conflicts, and an unvarnished look at the human condition. Pretty good stuff, if you ask me! Move over, Netflix and Hulu!”

FQ: Are there other Dickens novels that are calling to you, asking for a sequel?

WHALER: Not at this time, but it would be an interesting idea for Dickens,’ Great Expectations!

FQ: Is this your first audio ebook? Might you also do audio versions of your other children’s books?

WHALER: Yes, this is my first interactive ebook with narration, illustrations and music. The adult edition of the book with the same title also has an audiobook edition with sound effects and Christmas Carols (carols are a bit more classic and haunting, though), produced in London with Gordon Griffin as narrator. I am definitely thinking of producing interactive ebook editions of my other books!

FQ: How difficult was the process of converting your story to audio and would you recommend doing audio ebooks to other authors?

WHALER: It is definitely a longer process, to be sure! But I think the effort is well worth it! I mean, narration, illustrations, and music all in one book! And yes, I would recommend to other authors! It is a great way to ‘up’ their game with readers!

FQ: This story is a shortened version of your 2017 print story by the same title. How hard was it to re-work the text, writing in verse, and deciding what to include and what to cut out? Was it hard to leave so much of the “original” sequel behind?

WHALER: There are many lessons and themes in the adult edition geared to an older reader. For the children’s edition, I needed to simplify for a much younger reader and select just one theme to be the focus. In this case, I chose ‘kindness,’ something a younger reader could readily understand and everyone can do.

FQ: I love the addition of the Christmas carols to the book. How did you decide what songs to include?

WHALER: My father was a classical composer (passed in 2011) and wrote four of the carols I included in the book. The other selections were based on classic Victorian traditionals with an ‘up’ feel, not only for children to enjoy, but adults as well!

FQ: Might we be seeing Tiny Tim in another story next Christmas? Or, if not, what’s your next project?

WHALER: I am working on another ‘Oink and Gobble’ book (series book 4) that should be out by Spring 2021.

Posted by FeatheredQuillBookReviews at 8:29 PM