#BookReview - A Wish For A Christmas Fish 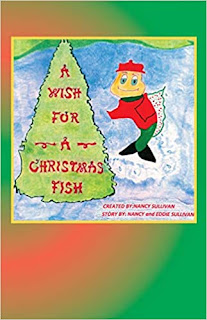 A Wish For A Christmas Fish: Secret Adventures Of The North Pole

A fish tale, in the truest sense of the word, has a town full of adorable little fish going on all sorts of adventures, ending in a twist that shows children the true meaning of Christmas.

Rufus is a rather mean, grumpy fish who just loves other fish. In fact, he loves them so much because, well, he eats them! Along with his friend Cliffy The Catfish, the two wreak havoc on their local part of a lake. In desperation, some of the members of that lake ask Dr. Gilfish to help them get rid of the two troublemakers. Dr. Gilfish is quite clever and comes up with a plan that meets with great success (you’ll have to read to see what he does).

Rufus and Cliffy eventually settle in the town of Jollybrook. It’s a town full of friendly fish, fish that Rufus has sworn not to eat. While the two friends settle into their new home, some of the other fish decide to play miniature golf. After a bit of play, as they get ready to start yet another round of golf, Frankie Fishy has an idea. “…Why don’t we go to the surface, and look for the Flying Orange Craft?” At first, the other fish don’t want to go on a search, especially since it means heading up to the surface to look for a flying craft that only Frankie has ever seen. Eventually, however, Frankie convinces his friends and off they go.

Amazingly, while looking for the Flying Orange Craft, the friends actually spot the strange vehicle. Together with the craft’s pilot, Eddie Elf, all the fish pack into the vehicle and go for a ride. They explore a nearby town and learn all about Santa and what Eddie Elf can do with his magic candy cane.

When the fish friends return to Jollybrook, they get ready to attend The Jolly Good Christmas Party. It’s an event the whole town is excited about. Santa’s Magical Christmas Wish Lantern is setup by the Christmas tree. Once the party is underway, each fish will make a wish at the lantern. Frankie’s wish is no surprise, “…Santa, my one and only Christmas wish…” is a Flying Orange Craft of his very own. But when Rufus and Cliffy arrive at the party, the celebration may not go as planned. It appears Rufus is reverting to his old ways and is about to eat poor Louie the axolotl (a Mexican walking fish)! Will Frankie be able to save his good friend Louie before it is too late? This is one “tail” that has a very exciting ending for both fish and readers alike.

A Wish For A Christmas Fish is by far one of the most original children’s stories I’ve read in a long time. It definitely takes a lot of imagination to come up with a story filled with fish adventures and keep it interesting. Initially focusing on Rufus and Cliffy for the first two chapters, the book then switches to the adventures of several other fish friends. Rufus and Cliffy seemed to disappear from the story and I found myself wondering what happened. But the authors had the tale well-planned out and the two miscreants reappear to cause problems and notch up the excitement level as the story reaches its climax. The easy-reading chapter book would be well suited for a child who has moved beyond the simple stories of the typical 32-page hardcover adventure, but not quite ready for more in-depth novels. Along with the modest but very bright illustrations, and the aforementioned creative story, A Wish For A Christmas Fish is a good story to keep young readers engaged.

Posted by FeatheredQuillBookReviews at 9:11 PM