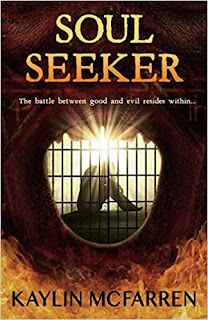 In our minds, as readers, we begin with familiarity: The stench of the prison; the cold air that seems to penetrate the skin (even though you’re home in a nice, warm room reading); the clank of the handcuffs; the clunk of the locks on the metal doors. Here is where we first meet the murderer, Benjamin Poe. Now, Benjamin has been in prison for four years, found guilty of killing his own son. Although he has always stated that, yes, he did fire all the bullets; Ben has also always stated that it was not his son he was after.

Enter attorney Pierce Beaudoin. With a slightly failing independent practice, Pierce is hoping that helping this high-profile defendant who is most certainly headed for Death Row no matter what ‘magic’ a lawyer tries to create at the last minute, will help Pierce bring in more clients. So here he sits in Lochton Correctional Institute in small town Lochton, Illinois, staring at Ben. Pierce is looking for any information on who might have also been there the night of the killing if Ben is telling the truth about “being after someone else” when he fired the gun.

What Pierce ends up with is a story of monumental proportions. Not only will he learn all about Benjamin’s life as a firefighter in the small town, but he’s going to learn about the man’s somewhat shaky marriage to Lexi, his relationship with his boy, his devotion to the peaceful town, and how, exactly, Ben was tricked into killing his son by a demon who is the perfect representation of pure and utter evil.

After a wretched fire at the College Inn, where lives are lost, Ben gets a call from a police officer letting him know that a vagrant has been picked up trespassing on the site of the fire who has an odd request: he needs to speak with Ben. Although this person has no priors and is a highly passive man, according to the officer, the one thing about him is that his eyes are such a startling green color that they make Ben, and others, uneasy to be around him.

The name of the "vagrant" is Crighton and his story is unbelievably intertwined with Ben’s as well as other souls he has been sent to seek. Malevolent to a fault, Crighton’s main job is to work for Lucifer rounding up wicked souls and one important angel that Lucifer is after. Trouble is, Crighton finds himself placed in a situation where that particular angel is going to go from being his prey to being his very own soulmate – causing the King of Hell to turn against Crighton.

Now, being the target of Satan’s wrath, Crighton has a new future to think about. He can no longer be an arrogant danger to the populace; instead, he must walk the very thin line of either finding redemption or finding himself thrown into the pits of Hell and living a life of eternal hatred, anger and enslavement.

Even when Benjamin Poe meets his end in the book, the unveiling of the story and how Crighton is introduced into the tale, makes the heart beat fast and causes you to want nothing more than to start the journey as swiftly as possible. And quite a journey it will be, because this book is only the very first in a series entitled "Gehenna."

The book is fast-paced and all the characters you expect to see when speaking of the “otherworldly” are there to enjoy – from the brightest of angels to the darkest and most evil demons, this writer has done a fantastic job of putting it all together.

My advice would be, however, to keep an open mind. Yes, there is romance in this story. I know that some admirers of the category Christian Fiction can’t see past the characters to enjoy the romance, but this book does everything very well. To me, it is an amazing supernatural story that is so good I am already looking forward to seeing where the series goes next.

Quill says: The twists and turns in Soul Seeker are unique, and guaranteed to keep readers on their toes!

Posted by FeatheredQuillBookReviews at 6:58 PM